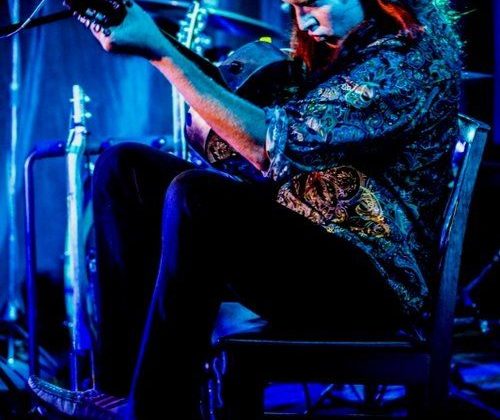 8 Ball Aitken brings his swamp blues music back to the ACMA! He was the first musician we hosted at All Faiths and he’s been coming back ever since. Be sure to ask about the story behind that!
Australian-born, Nashville, Tennessee-based, singer, songwriter, slide guitarist, cast away his cover gigs some seventeen years ago to hit the road, building a credibly successful yield, built solely on live performances globetrotting eighteen countries and still counting

8 Ball as his unusual name suggests, he is cut from a different mould. He throws a highly energetic and engaging, quite humorous performance, padded with a combination of guitars including an impressive three string bewitchery. He is the “legal shot” and sits deep in the pocket of collaborating audience engagement with grooving music like the white ball sinking the black.

8Ball has fashioned his musical style from a true infusion of roots from blues, alternative country and rock. He takes on the bull with his slide guitar riffs, slides across the green felt with antics to impressively entertain even the most under-enthused punter. His clever songs will have everyone on their feet grooving and cheering infectiousl

8Ball released his 10th Album SWAMP BLUES in 2018 to debute at #2 in the Australian Blues Music Charts 2018 and single ‘High Water’ went to #1 on the AMRAP AIRIT Radio charts. 2019. Its his most celebrated album to date, following other highly acclaimed albums such as “Rebel with a Cause” and “Southern Hemisphere” boasting of his other industry praised singles “She’s going to Mexico I’m going to Jail” and “Hand’s on top of the wheel”