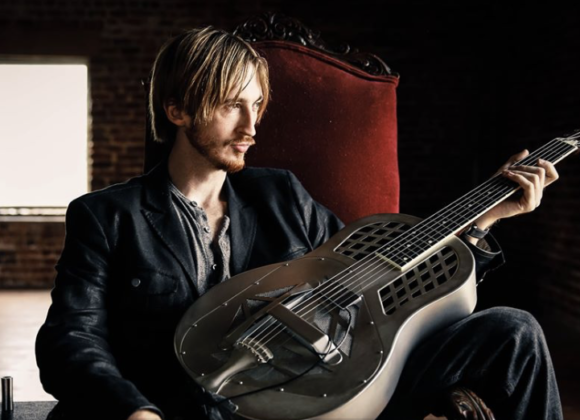 “Everybody knows the story of the crossroads, where blues guitarists go at midnight to trade their souls to the devil for musical prowess. It’s just a myth, of course, but if it were true, firebrand Eli Cook could have bragging rights, as his scarifying solo-country blues chill like a hellhound on your trail.” – Guitar Player (2007)

Eli Cook is a mystifying soul. He’s a keen observer, a provoking thinker and has swagger.

All under that messy blonde hair is a passionate heart with fingers of silver and gold that recalls John Lee Hooker, Chris Smither, and Chet Atkins, mixed in with a dirty, grungy sound. It’s clean playing mind you; it’s just his fingers are covered in the dirt left over from the crossroads.

Coming from Albemarle County in Virginia at the Foothills of the Blue Ridge Mountains, Eli Cook grew up listening to the blues, country, classic rock and alternative rock. He grew up with no TV and radio shows like Prairie Home Companion were his Saturday night entertainment. Life moves slowly in this rural area of the world giving him time to hone his skills with his voice and guitar chops. At 18 he was opening up for B.B. King – a few years later he’s playing in Canada – and then the next week he’s blending in with his hometown locals. Talent like this shouldn’t go unnoticed, and Eli has been smoldering in the underbelly for far too long.

“It’s what was around me, and I just tried to pick up on everything and everybody, including Doc Watson and Chet Atkins. In fact, hearing Chet fingerpick made me realize I didn’t need a band.” (Source: Guitar Player 2007)

The growl in his voice shows off an emotional connection to the music as a tool rather than decoration, and with your eyes closed, you could be listening to Howlin’ Wolf or Chris Cornell. With his new CD High-Dollar Gospel, Eli shows you what you can’t imagine, something so strong and melodic, so don’t be afraid to look and listen.

“Artists often talk about the blues as a living and growing thing and not just a style of music ﬁt for museums. Cook puts that theory into practice and moves things forward.” – Slant Magazine

Back away the concrete is buckling.

Thomas Earl has been writing and performing music for over 50 years. He is proficient in both guitar and bluegrass banjo ,with a focus on creative finger style techniques. He has written dozens of original songs, including original music for theater productions, and has released two CDs of original music. Reviews of his CDs include descriptions such as , “…a gifted poet that has the ability to set it all to music in a beautiful and unforgettable way … “, …a five star indulgence from start to finish.” and “Golddust Magic glitters with years of musical talent”. Thomas’ unique approach to playing and writing is based on very early influences ranging from Joni Mitchel and Mississippi John Hurt to James Taylor and Tom Waits. He has been compared to such contemporary artists as Iron and Wine and Ray LaMontagne.. Thomas spent a year in Maui working on his most recent single releases and has just moved to Venice, FL from the Woodstock, NY Area.
www.thomasearl.com