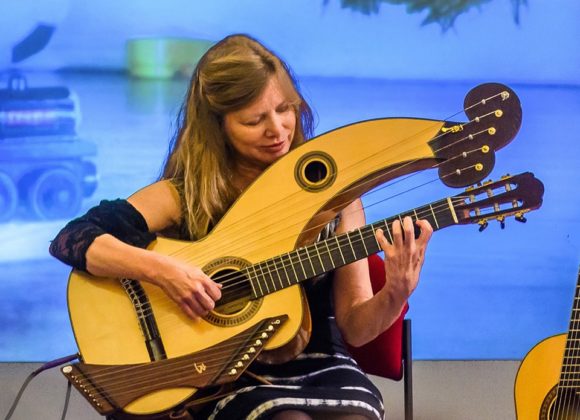 MURIEL ANDERSON:            Donations this show $15-20.00
One of the world’s foremost fingerstyle guitarists and harp-guitarists, Muriel Anderson’s obvious joy of music, humor and her facility across the genres of folk, classical, bluegrass, popular and international music is revered by guitarists worldwide. An engaging performer, Muriel’s unique approach to the instrument virtually transforms the guitar into a lyrical choir, then a marching band, then a Japanese koto, then a Bluegrass band, one minute launching into a Beatles’ tune and the next, a Spanish classic. In addition, her new program is highlighted by a backdrop of stunning visuals by celebrated photo-artist Bryan Allen, bringing you on a world tour, and even into space.

Muriel is the first woman to have won the National Fingerstyle Guitar Championship and has performed/recorded with Chet Atkins, Les Paul, Victor Wooten and the Nashville Chamber Orchestra. Her CD “Nightlight Daylight” was chosen as one of the top 10 CDs of the decade by Guitar Player Magazine. She is host of the renowned Muriel Anderson’s ALL STAR GUITAR NIGHT® and founder of the MUSIC FOR LIFE ALLIANCE charity.

Her new project “Acoustic Chef” is an international cookbook with a CD containing a tune for each recipe.

Her recording of “El Noi de la Mare” appears in Woody Allen’s film “Vicky Cristina Barcelona.” and her “Heartstrings” recording accompanied the astronauts on the space shuttle Discovery. Muriel Anderson has released more than a dozen instrumental CD’s, eight instructional DVD’s and guitar books published by Hal Leonard, Mel Bay, and Zen-On Japan. Her compositions include commissioned classical works for the Nashville Chamber Orchestra and Vox Caelestis Womens Choir, as well as songs which have appeared as title tracks for three albums by various artists.

Muriel Anderson is a good friend and a great guitarist. She deserves national recognition
…Chet Atkins

Just one hell of a great player …a great personality and what I like is the touch that Muriel has on the guitar, the way she plays it like we all wish to play.
…Les Paul

She has demonstrated excellent technique and has the fine musicianship to communicate well to her audiences.
…Christopher Parkening

I cannot think of another guitarist who seems to have taken over the role of Segovia in popularizing the finger-style guitar as Muriel Anderson has.
…Lawrence Long, Knoxville-Oak Ridge Guitar Society

Acoustic guitarist Muriel Anderson… has justifiably gained a reputation as one of the world’s best, and most versatile, guitar instrumentalists.
…Chicago Tribune July 29, 1997

After reaching the top in her field – she is widely recognized as the premier female fingerstyle guitarist today – Anderson hopes to encourage and inspire a younger audience, to turn them on to the beauty of making music, and maybe in some cases, even turn their lives around.
…The Reporter, Melissa Erickson, Nov. 1999

Theme for Two Friends marks a new renaissance for classical guitar and cello! Ms Anderson’s compositions are flawless. Work like this assures me that music in the next century is in good hands.
…Illinois Chamber Ensemble Nicholas Fuchs, Music Director Emeritus

Wildcat is not only Muriel Anderson’s best CD to date, it is perhaps the best album of the year.
…Steve King and Johnnie Putman of WGN radio

With playing that grabs you by the ear and never let’s go, this is a fine portrait of an artist that just keeps getting better and better fully deserving of a toe to toe spot with the masters that have taught her so well.
…Chris Spector, Midwest Record Recap

Composer, guitarist, and harp guitarist Muriel Anderson has composed music since about age five. She fell in love with the guitar at an early age and learned every style available to her, beginning with folk, bluegrass and jazz. She received a degree in music from DePaul University and went on to study with classical virtuoso Christopher Parkening and with Nashville legend Chet Atkins. Her current CD “Nightlight Daylight” is a culmination of her creative spirit and has won 11 awards including Global Music Award’s Best Instrumental Composition for “A Bakers Dozen.” Books of her original music include “New Classics for Guitar and Cello” and her works have been performed by the Nashville Chamber Orchestra and Chicago’s Vox Caelestis among others. She is founder of the Music for Life Alliance charity and the Muriel Anderson’s All Star Guitar Night®.