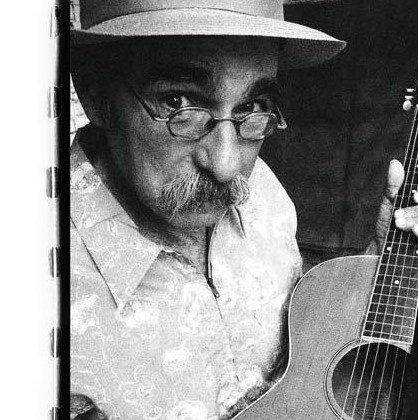 Roy said “Let’s do it again” and so we are…and we are thrilled to welcome Roy Bookbinder back to the ACMA.
Roy has the goods: the original, the bare-knuckle, the low-down . . . blues. Who can say they were friends with the Rev. Gary Davis, Pink Anderson and Robert Lockwood? And toured with Arthur Big Boy Crudup, Hot Tuna, JJ Cale & Bonnie Raitt ? Roy can. He has the stories, the licks, and the mystery of timeless music in his fingers. He’s been featured on a PBS special and interviewed by Terry Gross on “Fresh Air.” He’s also a regular at Fur Peace Ranch, where he teaches along with Jorma Kaukonen. When he brings his ‘Tour Bus’ to town, a one-man blues-fest ensues. He plays and he entertains, feeding us music and stories, and the evening is a celebration for us all. We’re privileged to have Roy here to preserve–and extend—the tradition of great American blues music. (JAMES HIPP)
www.roybookbinder.com
Opening for Roy is ACMA founding member Bill Metts: Bill Metts started playing guitar during the Country Blues revival of the 60s and fell in love with the art of finger-style guitar. He began his writing career after moving to South West Florida and regularly attending open mics in Fort Myers, notably the (sadly) no longer operating “Nita’s Sweet Bean Café” where many local singer songwriters cut their teeth. Shortly after, he was asked to served on the board of the nationally known Americana Community Music Association and hosted their weekly Songwriter Circle for four years. He has also, for seven years through a not for profit organization called Hope by Song, been composing songs from the writings of people dealing with great emotional trauma in order to help them heal through the power inherent in music. He has performed at the prestigious Mississippi John Hurt Blues Festival, the world famous “Ground Zero” in Clarksdale Mississippi and twice at the Island Hopper Festival Songwriter Fest. He has also opened for such greats as award winners Doug MacCleod and Jon Shain, and is scheduled to open for the legendary Roy Bookbinder.
www.mettsmusic.com