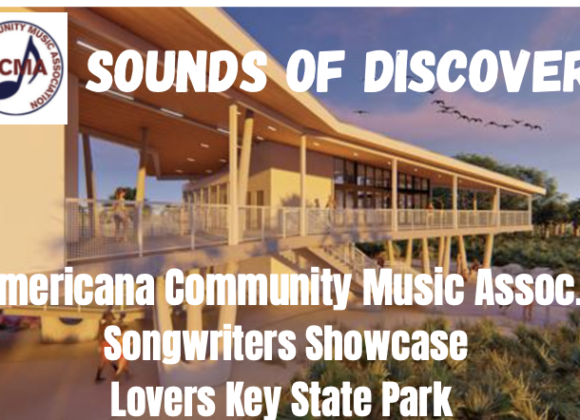 Sounds of Discovery, Acoustic Concerts At Lovers Key State Park
Marie Nofsinger, Bob Williams, Bill Steel
Friends of Lovers Key, FOLKS, has joined with The Americana Community Music Association to offer Acoustic concerts of all original music. The concerts will take place in the new Welcome & Discovery Center at Lovers Key State Park. All shows are an intimate songwriters showcase, with the artists taking turns performing their own compositions and telling the stories behind the songs.
This will be a special evening that you will not soon forget. The musicians will be available at the break and after the show to discuss their music.
Ticket pricing will include two glasses of wine, as well as park entrance fee. Ticket pricing is $25.00 per person and available with the link below.
The Americana Community Music Association is a Fort Myers based not for profit that promotes original Americana Music. www.americanacma.org
Show at 5:30 pm, Doors open at 5:00pm
Ticket Linkhttps://www.eventbrite.com/e/sounds-of-discovery-songwriters-showcase-at-lovers-key-state-park-tickets-165853033889?aff=esfb&utm-campaign=social&utm-content=attendeeshare&utm-medium=discovery&utm-source=fb&utm-term=checkoutwidget&fbclid=IwAR2mJW3QXLZCj_f-NitTIYuFzgUprDIW74Egd89KRkbv8nn016MRMlJWACY
Marie Nofsinger, Known as the “OUTLAW SONGWRITER”
Award winning songwriter, national touring performer and recording artist Marie Nofsinger will take you on a journey into the soul of America.
Tales of outlaws, anarchists, the common working man, Jesus and broken hearts fill her original repertoire. Lilting melodies, swamp stomp rhythms, as well as jazzy swing tunes carry the lyrics into your memory.
Her credits include her CD “Boots” which was voted City Link Magazine’s “Best Acoustic CD of 1999” and the latest 2010 release “The Wildlife Rides Again” chosen as “Best Roots and Acoustic CD of 2010” by the Palm Beach Post Entertainment Editor. “I’m Drunk Again” and “The Ash is Gone” are in the movie “Borderline Murder” and “Honey Bee” is in a series called “Sasquatch in the Kitchen” in Alaska. The newest release of a children’s educational video in May 2013 can be seen by visiting SpectrumKids1/youtube.
Marie was in the cast of the two sold out shows “Carry It On – The History of the Labor Movement in America -Tribute to Pete Seeger”, Feb. 2014.
She has won numerous songwriting awards including First Place First in Best Original Song by Suwanee Springfest, 1st Place Ballad by the South Florida Folk Festival and was selected as the “1999 Best Local Acoustic Performer” by the New Times Magazine. Marie is also a 16 year member of the wild woman band known as the “Habanero Honeys”, a staple of Suwanee Springfest and at the 2012 and 2014 Virginia Keys Grassroots festival.
She is also one of the 10 Magnificent Musicians of Palm beach County from the 2002 Palm Beach Post TGIF. She has performed throughout the USA, the Caribbean and Europe.
Bob Williams, In the late sixties, as a young guitar player from Long Island, NY, Bob began writing his own music. Pulling elements from Folk-Rock and Country-Rock, Bob created a sound all of his own. Always eager to share amusing stories behind the lyrics, Bob’s songs are personal, irreverent, funny, sad, and most important, true to his heart.
With encouragement from family and friends, he produced and released his first CD, No Apologies, in 2015. With his first CD well received, Bob released his second CD in 2018, Ain’t Sorry Yet. In 2020, he released his first CD with The Pearl Street Band, Rocky Road.
Bob just released his third solo album It’s Good to be Back. All of songs are available on this web site. Recording from home and exchanging tracks with musicians from all over the country has really made this new album very special. The songs are truer to the way they are performed.
When not performing original music solo, Bob performs regularly with The Pearl Street Band on Fort Myers Beach, Florida. They play originals and a few obscure covers.
In addition to being a prolific songwriter, Bob serves as VP for the Americana Community Music Association MA Songwriter Showcases.
Bill Steel picked up guitar when he was 12, but only began singing ten years later while travelling through Central America.
Music took a back seat to career and family until retirement where Bill began playing open mic sessions in Florida. He met members of the AMCA, who encouraged him to try his hand at songwriting. His songs come from life experiences and his passion for travel and sailing.
+ Google Calendar+ iCal Export