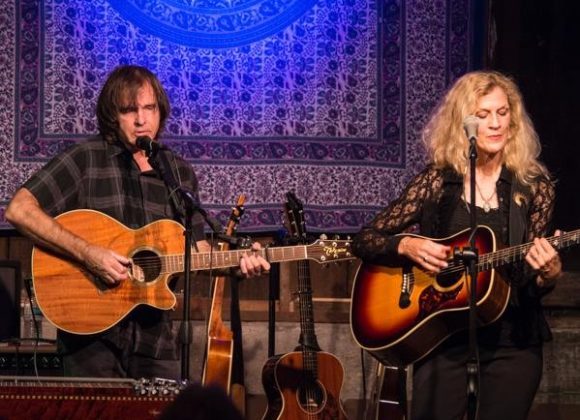 In the 11 years of playing together, Jennings & Keller have released 4 CDs. They have received accolades and airplay from radio stations at one end of the country to the other. In true troubadour spirit, Laurie and Dana travel the country in their motor home, performing at festivals, cafes, wineries and house concerts. Along with developing a large and loyal fan base, they have earned a reputation for quality musicianship and expert storytelling.

“We’ve had perhaps a dozen home concerts now and attended a half dozen more. Laurie Jennings has a beautiful, polished voice. She and Dana perform original folk and western numbers which are gripping and delightful. Probably the best voice we’ve had the opportunity to enjoy. Dana plays a variety of guitars with beautiful style and tone. They’re a GREAT combination and will be long, long remembered by our audience”-M. Eisenburg, Comstock House Concerts, CA – Aug. 2015
www.jenningsandkeller.com

Opposites attract like the negative and positive poles of a magnet. Amber Crowley’s professional life brings together the science of ER medicine and art of acoustic music. Life and death decisions face Amber Crowley every day in the ER. She runs codes responding to the sirens and machine alarms, in a broken, overburdened medical system. From this chaos emerges a soulful voice that brings soothing peace and smiles to both the listener and the performer herself. Amber is a Physician musician with Cape Cod and Naples Florida roots, her original songs often reflect the beauty and her love of the natural environment. Her original songs are both skillfully crafted and emotional and her performances energetic and passionate. In contrast to the automated machine filled ER, her music is filled with human spirit and emotion.
Amber started playing guitar and singing in a high school folk group, and has performed professionally for over 40 years with multiple CDs and EPs. Most recently she performed at Naples Botanical Gardens and Charter Club Resort. She also has shared her music for many years for Hope Hospice, American Cancer Society and other nonprofit events. Her most requested originals are “License to Sing the Blues”, and “Snowbird”. Several recent songs reflect her love for the environment “Save our Oceans” and “Spirit of the Mangroves”