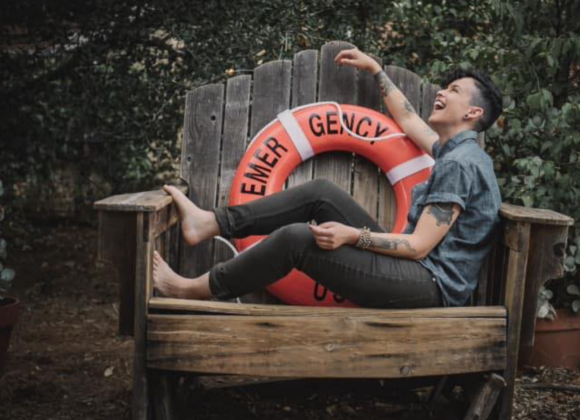 April showers bring May flowers AND Abby Posner to our ACMA stage for a night of great music!
Abby Posner has been a working musician in Los Angeles for the past 18 years. She is best known for her ability to play nearly any instrument that she can get her hands on, twisting genres, and pushing the boundaries of folk, roots, electronic, and pop music making her “Genre Fluid.” If you have seen Abby perform live, you know she can play a mean lead-blues guitar solo, or throw down a complex Earl Scruggs banjo riff. You also may have spotted her playing drums, mandolin, or bass while using her looping pedal. In addition to her versatility, she puts passion and soul into everything she does.
Posner has also scored the music for multiple films (Across Land Across Sea, Through Their Eyes, award winning short animation Elizabeth Sees, and recently scored the Award-winning Documentary Lady Buds) while playing and touring all over the US. In 2019 Posner played banjo and sang Wagon Wheel as a featured principal role in Bank Of America’s ad campaign for the Ken Burn’s PBS Country Music Documentary.
In 2020 Abby Posner won the Carl Gage “Give me Shelter in Place” Songwriting Award through the Topanga Folk Festival for her original song Blind Spots, and she received the runner up for her song Emergency Use Only for the 18th Annual International Acoustic Music Awards. She was honored to land an Official Showcase at Folk Alliance International in 2022 and will be releasing 2 new records in 2023.
https://www.abbyposner.com
Opening the show is ACMA member and singer songwriter Fred Ball. Fred told us, I got my musical start in Greenwich Village in the early 60s during “The Great Folk Scare”. Played primarily folk music until the late 60s when I started playing in a wedding band (if I ever have to play “The Shadow of Your Smile” again I might throw up). In 2005 Fred recommited himself to his music and said this..We moved to Florida in 2018 and I started out running the open mic at George andT Wendy’s Sanibel Seafood Grill until COVID shut it down. I have played local gigs at Woody’s, Hooked, The Perch at The Wyvern in Punta Gorda, and The Paradise Deli. I happily found the ACMA three years ago.
Songwriting has become my passion and I spend time each day in pursuit of that! As a resident “old guy” my hands are now showing the ravages of age but will play until I cannot! You have to love what you do……..and I do!
Tickets are available at the door. Door donations are:
$12 for Members
$18 for General Public
+ Google Calendar+ iCal Export