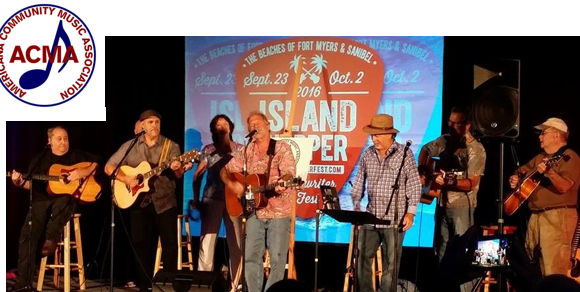 We are excited to announce the 2017 show will be back at the Holiday Inn 2431 Cleveland Ave, Fort Myers, FL 33901. Come and enjoy a Free show with some of the best local singer songwriters. Original songs and the stories behind the songs.

Bill Metts, was influenced by the music of Taj Mahall, Mississippi John Hurt, Doc Watson and others.  Bill’s original songs are down home finger-picking style.

“Robert Bidney is a strong, new voice on the indie album scene that’s been a long-time coming.”  His messages are as strong as his melodies with an appealing pop / soul sensibility, leaving listeners wanting more. His songs have been covered by legends in the music industry. With songs on the national charts, his album “IT’S ALL ABOUT THE LOVE” is gaining traction as he continues to tour.

Bill Veach has a love of travel that is expressed in many of his songs. His songs are often autobiographical, about his experiences, travel, love, loss and some characters he has met on his journey.

Carlene Thissen performed early on as a folk singer and then branched out into country.  She is heavily involved with Immokalee, a farming community that inspired many of her original songs.  She has also written two books: Immokalee’s Fields of Hope and Called from Silence.   Carlene sings and plays piano and guitar at house concerts, clubs, restaurants, festivals and charity dinners.

Mike McMillan got his first guitar as a teenager and has been pursuing his musical dreams ever since (in between jobs, 4 kids and several dogs).  After his first Doc Watson concert in the 1970’s, he was inspired to learn finger picking and then later, many blues songs. Mike can be found performing regularly on Fort Myers Beach.

Bruce Gallant has been writing songs for over 30 yrs. His songs are a reflection of different times in his life and he considers them his journal. Bruce’s wife, Cecile accompanies him on mandolin. They have recorded one CD “Her and Me”, and are presently working on another