Postponed. Songwriters on the Plaza 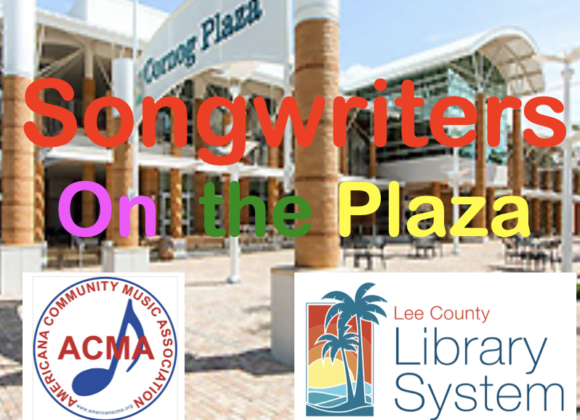 Mary Dahl,& Carolyn Stanley, Smokey Dayton & The Floridians
The Lee County Library has joined with The ACMA (Americana Community Music Association), to offer FREE concerts of all original music by local Artists. Concerts will take place in the Amphitheater, which is located on South Cornog Plaza. Bring a chair or a blanket, shows will be moved to the meeting rooms located next to the amphitheater if needed depending on weather.
The ACMA is a Fort Myers based not for profit promoting local artists who perform original songs. What to expect, you will hear singer-songwriters sharing a lifetime of experiences in song and the inspiration behind the songs. Be prepared to enjoy an evening of professional quality acoustic Americana music. Americana music a coming together of blues, roots, folk , bluegrass, and country. Lots of room to spread out so bring a friend.
Carolyn Stanley began playing guitar as a teenager learning to finger pick country blues from her older brother. Since then she has performed solo, joined several duos, performs in a trio of her husband David and Mary Dahl and facilitates an eclectic string band accompanied by her husband David on bass.
Mary Dahl performed for 20 years with The Lite Side quartet in the PA, MD and DC areas. Some of the highlights of their performances include entertaining six times at the White House for 3 different administrations , Christmas specials at Hershey Park Chocolate World and opening for the Kingston Trio at the Carlisle Theatre in 1996.
Carolyn and Mary have forged a harmonious duo and strong friendship since joining the Americana Community Music Association.
Gene Martin has been singing in church choirs and choruses since childhood, playing guitar since his teen years and joined the ACMA in 2016 when he began song writing.
He soon founded “Smokey Daytona and The Floridians”, a trio with Mary Dahl and Al Candelaria, that features their original songs and covers with the tight harmony. When Chuck Dettmann is in Florida, the trio becomes a quartet.
Al Candelaria is a member of the trio ‘The Innocents’ and is a BMI songwriter.
Highlights include being featured in the PBS special, “Rock, Rhythm, and Doo Wop” in 2001 and being inducted into the Doo-Wop Hall of Fame in 2014.
Dave Stanley will be playing bass for some of the songs.
+ Google Calendar+ iCal Export