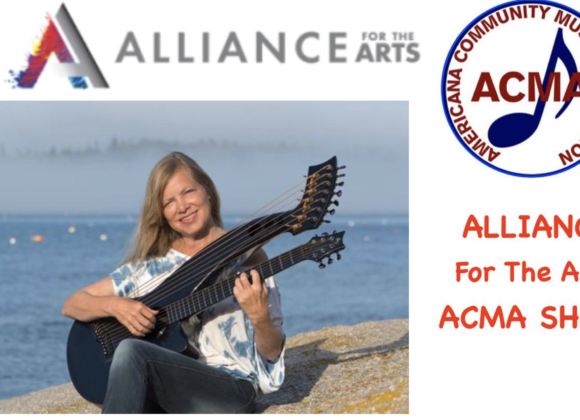 Please note this concert will be held at the Amphitheater stage on the Alliance grounds.
How reservations work for outdoor concerts: We will be accepting the first 132 people for concert reservations. IF weather threatens the outdoor concert it will be moved to our indoor theatre for general admission seats. If there is no weather threat we will sell additional tickets at the door the day of the concert. Tickets at:
www.artinlee.org
MURIEL ANDERSON CONCERT WITH MULTIMEDIA VISUALS
Muriel Anderson is a guitarist/harp-guitarist and composer, embracing music from all over the world with grace, joy and humor.
Muriel is the first woman to have won the National Fingerstyle Guitar Championship. Her CD, “Nightlight Daylight”, was chosen as one of the top 10 CDs of the decade by Guitar Player Magazine, and her “Heartstrings” recording accompanied the astronauts on the space shuttle Discovery. Among those she has performed/recorded with are Chet Atkins, Les Paul, Victor Wooten, Tommy Emmanuel and the Nashville Chamber Orchestra. Her obvious joy of music, humor and her facility across the genres of folk, classical, bluegrass, popular and international music is revered by guitarists worldwide. An engaging performer, Muriel’s unique approach to the instrument virtually transforms the guitar into a lyrical choir, then a marching band, then a Bluegrass band, one minute launching into a Beatles’ tune and the next, a Spanish classic.
Muriel’s multimedia show takes you on a journey in music and stories, with a backdrop of visuals artfully projected behind her. It is a musical journey through space and around the world. Truly an experience of all the senses, her show often incorporates aspects of her new project Acoustic Chef with visuals by celebrated photo-artist Bryan Allen. Her new TrueFire channel brings her in-demand teaching to a wider audience. Muriel is host of the renowned Muriel Anderson’s ALL STAR GUITAR NIGHT® and founder of the MUSIC FOR LIFE ALLIANCE charity.
“Just one hell of a great player…a great personality…the way she plays it like we all wish to play.
‘ Les Paul
‘Muriel Anderson is a good friend and a great guitarist.
‘ Chet Atkins
‘Acoustic guitarist Muriel Anderson… has justifiably gained a reputation as one of the world’s best, and most versatile, guitar instrumentalists” Chicago Tribune
www.murielanderson.com
Opening for Muriel is Ray Cerbone:
One of the founding members of the Fort Myers ACMA (Americana Community Music Association), Ray began playing guitar during the late 60’s folk scene. With the support and inspiration of fellow local and touring musicians, he began writing and playing in earnest in 2010. Traveling a long road in a short time, his music encompasses many genres, including Americana, Folk, Blues, Ballads, and a little bit of Country. His storyteller style takes the listener to another place in time, his music and lyrics bringing evocative insights into the many sides of life. Ray is also a singer-songwriter’s song-singer. That is, he does interpretive covers of other great originals by little-known but very talented artists using his own creative touch. His inventive fingerstyle guitar is uniquely diverse and easy-on-the-ears.
Ray’s recently released CD, “How Much Time” has received glowing reviews and is being featured on KEOS Radio in Austin, Texas, 98.1 as well as others. He has shared the stage with Jaime Michaels, Pierce Pettis, Muriel Anderson, Rebecca Folsom, Jefferson Ross, Brian Smalley, as well as Roy Schneider and Kim Mayfield (The Reckless Saints), and Robin O’Herin. He has performed at several Florida Folk Festivals in SW, Central, and Northern Florida as well as house concerts, and the BMI sponsored “Island Hopper Festival” in Ft. Myers.
www.steelonwood.com
+ Google Calendar+ iCal Export