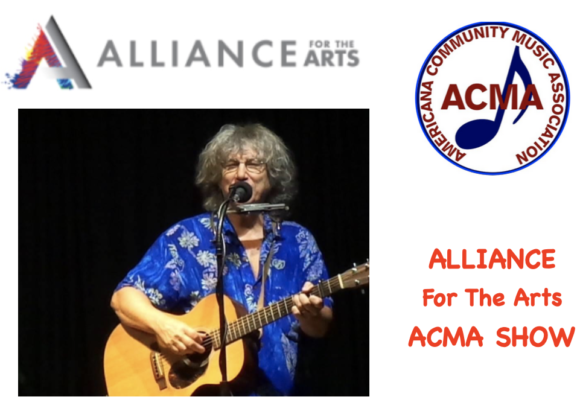 The ACMA is happy to once again be partnering with The Alliance For The Arts to present monthly Americana music concerts at the GreenMarket outdoor stage on the Alliance grounds. Folk Icon Rod MacDonald starts off the season. Ross Jordan will open.
How reservations work for outdoor concerts: We will be accepting the first 132 people for concert reservations. IF weather threatens the outdoor concert it will be moved to our indoor theatre for general admission seats. If there is no weather threat we will sell additional tickets at the door the day of the concert.
Tickets at www.artinlee.org
General public $16/ACMA/Alliance members $15
Rod MacDonald is an American singer-songwriter, novelist, and educator. He was a “big part of the 1980s folk revival in Greenwich Village clubs”, performing at the Speakeasy, The Bottom Line, Folk City, and the “Songwriter’s Exchange” at the Cornelia Street Cafe. He co-founded the Greenwich Village Folk Festival, now a non-profit, and is still the President and co-producer of its events. He is perhaps best known for his songs “American Jerusalem”, about the “contrast between the rich and the poor in Manhattan” (Sing Out!), “A Sailor’s Prayer”, “Coming of the Snow”, “Every Living Thing”, and “My Neighbors in Delray”, a description of the September 11 hijackers’ last days in Delray Beach, Florida, where MacDonald has lived since 1995. His songs have been covered by Dave Van Ronk, Shawn Colvin, Four Bitchin’ Babes, Jonathan Edwards, Garnet Rogers, Joe Jencks, and others. His 1985 recording “White Buffalo” is dedicated to Lakota Sioux ceremonial chief and healer Frank Fools Crow, whom he visited in 1981 and 1985, and who appears with MacDonald in the cover photograph. Since 1995 MacDonald has lived in south Florida, where his cd, “Later that Night” was named “Best Local Cd of 2014” by The Palm Beach Post and reached the top ten in national roots music charts. His first novel, The Open Mike, about a young man in the open mike scene of Greenwich Village, was published on December 5, 2014, by Archway Publishing. On December 10, 2020, MacDonald released his 13th solo recording, Boulevard, on Blue Flute Music.
A tenor with a clear voice and wide range, MacDonald is often cited for both his musicality and the content of his songs about political and social events: “Rod MacDonald is a brilliant folk singer and composer. His melodic songs possess words that go straight into your heart and soul.” The Press Of Atlantic City … “A poet with a lot on his mind who has never allowed himself to make points at the expense of making music.” The Boston Globe … “True to the folk tradition, MacDonald is not afraid to get political, take chances, and perhaps shock some people….MacDonald’s place in the folk hall of fame is assured by his ‘A Sailor’s Prayer,’ a hymn-styled tune that many people have mistaken for a traditional song.” All-Music Guide.
Although usually labeled a folk singer, his musical styles include rock, pop, country, light jazz, and blues. In addition to his work in Greenwich Village and Florida, he has written extensively of experiences on US Indian reservations and in Europe, living in Italy from 1989 to 1992.
www.rodmacdonald.com.
Americana Community Music Association member musician Ross Jordan will open the show. Ross has been writing songs since he picked up a guitar at age 10. His songs reflect the regional influences from all of the parts of the country that he has lived from New Jersey to the West Coast to the Mid-West and now Southwest Florida, His songs feature catchy tunes and lyrics and audience members can often be seen dancing and swaying and singing along. He is 1/2 of the duo “The Obstructionists”, with David Hintz and can be seen playing shows in Lee County and beyond!
https://www.reverbnation.com/rossjordan
+ Google Calendar+ iCal Export