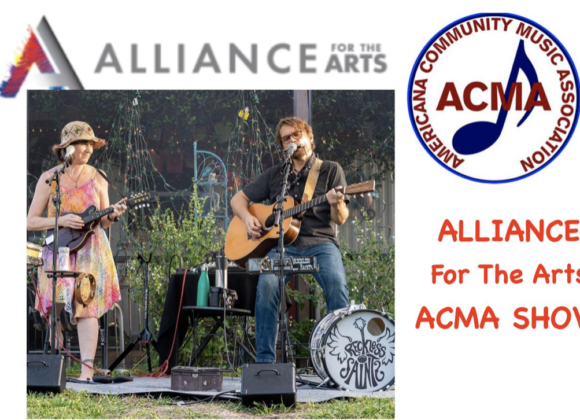 Our ACMA@Alliance Concerts continue!
Purchase tickets in advance at www.artinlee.org.
We will be accepting the first 132 people for concert reservations. IF weather threatens the outdoor concert it will be moved to our indoor theatre for general admission seats. If there is no weather threat we will sell additional tickets at the door the day of the concert. For this concert only rain time is 5 PM>.
The Reckless Saints bring their Blue Twangled Folk and Roll to the Green Market Stage
eckless Saints founder Roy Schneider was 16 and in hiding when a friend loaned him a guitar. He had just broken out of a Straight, Inc. facility after a horrific year-long incarceration, where he had been denied the right to play an instrument or even listen to music. Having access to a guitar again – as well as the support of good friends – helped him survive while he waited to turn 18, and begin his lifelong love affair with making music. Schneider went on to pursue visual arts, learning how to design toys in 3D, and writing and drawing syndicated comic strip “The Humble Stumble” through United Media. Ultimately, his passion for the many flavors of music that define the Americana genre, combined with his innate ability to play most anything with strings, led him to give up the ‘day jobs’ for a career in music.
He was making a living performing in local bars when Roy met Kim Mayfield. She added keyboard, mandolin, rhythm guitar, harmony vocals, and the idea to take the music on the road. .
Reckless Saints, the CD, has hovered in the top 50 on Roots Music Reports Americana Country chart since shortly after its release, and was included in their ‘Best of 2019’ list. The album features production ‘Guidance Counselor’ Gurf Morlix on the lone cover- Blaze Foley’s Election Day. Other guest artists include Freebo (Bonnie Raitt) on bass and Country Music Hall of Famer Charlie McCoy on harmonica.
www.therecklesssaints.com
Opening the show will be ACMA members Box and Lucia Cox as Java Moon Band. The Java Moon Band consists of Bob Cox, Lucia Jenkins, and Guy Rienzi. Lucia’s songs are folk and funk-fused, with jazz tinged elements. Guy’s originals cover a wide range of styles from root based rock to blues. Bob anchors the band as bass player and co-singer. The Java Moon Band plays regularly at local Naples venues and their schedule can be found at https://www.facebook.com/javamoonband
+ Google Calendar+ iCal Export