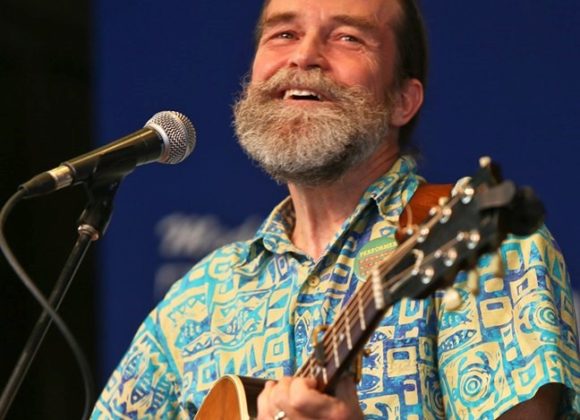 “Daniel’s songs are filled with sweet imagery and infallible word craft, and his live performances bring another dimension of energy and charm.”
– Singer/Songwriter Steve Gillette

Grassy Hill Kerrville New Folk Winner Daniel Boling shares experiences from a life well-lived in places as far-ranging as Okinawa, Japan, and Padre Island, Texas. This balladeer/songwriter brings his friendly tenor, fingerstyle guitar, frailed banjo, and beautifully-crafted story songs to delighted audiences throughout the U.S., Western Europe, New Zealand and Australia in over one hundred shows a year, from House Concerts and listening rooms to major festivals (Kerrville, Winfield, Woody Guthrie, and others).
Daniel was born into a traveling Air Force family, and worked as a National Park Ranger and a Criminal Investigator for the US Bureau of Land Management for 30 years. At 50, when most guys are starting to plan their retirement, he started touring full-time.��He has released eight albums since 1999 – the three newest produced by Jono Manson and released on Berkalin Records:
LIVE at The Kitchen Sink – May 2018
These Houses – 2016
Sleeping Dogs – 2013
He Dreams – 2009
Live from the Winter Folk Festival – 2009
The Old International – 2003
Welcome Home – 2000
Perfectly Stable – 1999
�These Houses was considered for GRAMMY Nomination as “Best Folk Album”, and both These Houses and Sleeping Dogs were chosen among “Top 10 Albums of the Year” by Folk Radio DJs across the U.S.
Daniel’s songs tell interesting stories about a variety of characters, including himself. His clear tenor draws positive comparisons to John Denver and Pete Seeger, and like Pete, Daniel is happiest when his audience sings too!
There’s a lot of Steve Goodman in Daniel’s delivery and storytelling. You can also hear the influence of other classic folk singers and songs from the great American folk tradition. It’s no surprise that iconic Appalachian folk singer Jean Ritchie is his second cousin. He’s won numerous songwriting awards including Kerrville New Folk, Walnut Valley Festival, Santa Fe bluegrass and Old Time Festival, Albuquerque Folk Festival, and Woody Guthrie Folk Festival.
There’s a reason that Still On The Hill calls him “one of the most talented songwriters on the circuit.” Whether or not you’ve walked the very same roads, you can’t help but relate to these songs – and no matter what your story is, you’ll love Daniel’s.
www.danielboling.com
www.concertsinyourhome.com/artist/cdanielboling.html
www.sonicbids.com/cdanielboling (Electronic Press Kit)
www.youtube.com/user/PerfectlyStableMusic/videos

For as long as she can remember, music has been an integral part of Elizabeth Reece Lockhart’s life. When she was just
six years old, her voice brought chills to audiences during solo performances as she delivered gospel music with a rich, full vocal range. While in school, she won numerous awards in state-wide vocal competitions. She was selected to open for Reba McEntire at age 12. Later, she chose Opera Performance at North Carolina School of the Arts, reaching the professional status of opera singer with the Inspiration Point Fine Arts Colony Opera Theatre and the Piedmont Opera.

Elizabeth spent most of her early career teaching and performing classical music, theatre and art song literature. But it was when she found folk/roots music that she was inspired to develop her self-taught guitar and writing style. Reminiscent of 60’s folk revival women icons such as Joan Baez, Judy Collins, and Joanie Mitchell, Elizabeth Lockhart delivers this type of quality performance. She has the ability to tug at a listener’s heart strings through melodies, stories and rich vocals that connect a listener to an authentic, feeling place within oneself.

“Her music always communicates. Her voice connects. It is contemporary, and it is deeply honest.”
Cynthia Arnold – president and CEO ‘One Earth United’

Master Key is a twelve-song collection of smooth, hear-felt tracks that gently draw the listener in, leading them on a poetic journey, from the soothing piano sounds of ‘’Lifer’ to the more dramatic and descriptive narrative and cello swells on ‘Widows Walk.’ Lockhart combines hundreds of years old traditional ballads with her original, contemporary folk compositions. Weaving together elements of classical, folk, world -pop and blues, Master Key delivers timeless orchestration, haunting stories and melodies with something special that appeals to a multi-genre, worldwide audience.

Have a listen to her work as an artist, musician and songwriter on Spotify, Apple Music or your favorite music platform. Or visit www.elizabethlockhartmusic.com for music, videos and showtimes.