Evening in a Songwriter’s Living Room. 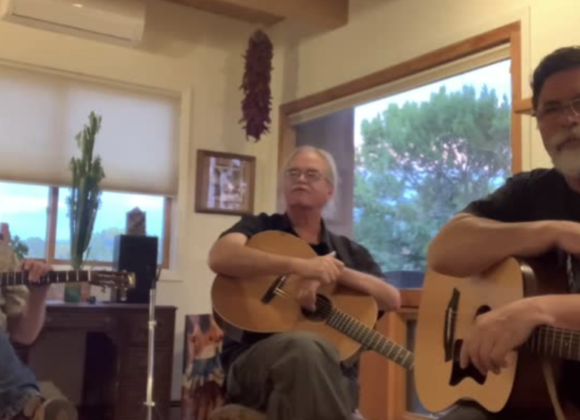 Evening in a Songwriter’s Living Room.

Long time ACMA member David Martin, now in New Mexico has but together a songwriters showcase that includes a few local friends with some intriguing musical backgrounds.

ACMA presents an Evening in a Songwriter’s Living Room. Tom Adler, Michael R.J. Roth, and David Martin will each perform their original material of acoustic Americana, folk, country, and other styles.

Tom, David, and Michael met over thirty years ago when all were involved with the “Sweet Inspiration” coffee house in downtown Santa Fe.  They got back in contact after Tom and David played a couple of gigs at local restaurants, and David and Michael ran into each other at a songwriter’s circle in Santa Fe.

Tom was an adjunct faculty member at Santa Fe University of Art & Design teaching the acoustic Americana ensemble, songwriting seminar and folk guitar and banjo.  His background includes many years and a wide range as a performing/recording musician and stage actor.   Tom played with the Fast Peso String Band, toured as a singer/songwriter appearing in film and on television and radio.   Tom was currently a member of the folk/Americana band, Bootleg Prophets.  Tom’s big secret that few people know is that he worked as a chimney sweep in the early eighties! Tom enjoys listening to music as much as performing it and loves to share folk music from the US and around the world (especially older recordings!) with his listeners Tom Adler has been a presence in the Santa Fe music scene for more than 50 years. Tom plays guitar and banjo with the Fast Peso String Band and his music has been in feature films and on NPR. He has 3 CD’s available.  https://www.amazon.com/Tom-Adler/e/B000APG8XS

Michael R. J. Roth has lived most of his life in New Mexico. His well crafted lyrics and melodies have won several song contests. He has been called “a cool dark troubadour…a modern day poet not unlike Townes Van Zandt” and a “Jedi songwriter,” evoking a mix of Leonard Cohen, Gordon Lightfoot, Johnny Cash, Jason Isbell and others with lyrics known for their intriguing imagery and “deep, profound truth.” Lori McKenna called him “Brilliant.”

David Martin started learning guitar in sixth grade, and played his first gig at about 14, a church wedding.  He got $50, playing guitar behind a singer for 3 songs, and realized this was easier than making burgers.  David played bass in several bands around Texas and New Mexico, opening for Asleep at the Wheel, Townes Van Zandt, Alvin Crow and the Pleasant Valley Boys, and playing six nights a week at steakhouses and theme restaurants.  David retired from his day job at Los Alamos National Laboratory, and is writing and performing around Santa Fe.  David produced and wrote a couple of songs translated by ACMA member Maria Valsi into Portuguese which are available on SoundCloud and other streaming services.  David’s song “Say A Prayer For Me” was selected as best folk song of 2020 by the New Mexico Music Association.  His songs range from simple country to bossa nova.