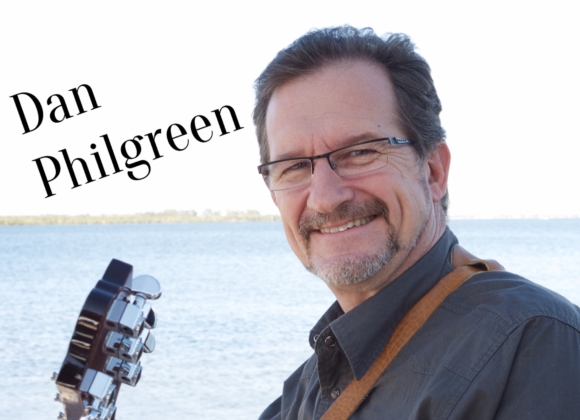 Feed Florida is a weekly ACMA sponsored event raising money for our local food bank. Each Monday will feature a different musical guest with all proceeds going directly to the Harry Chapin Food Bank of Southwest Florida.
Hosting the series is ACMA member Kim Mayfield.
This week our featured act is Dan Philgreen….
After failed attempts at violin and piano, Dan Philgreen picked up the guitar in the 7th grade. Like many of his age he was very influenced by the many singer-songwriters that were at the height of their popularity during the 70’s when he was in high school, as well as the folk-rock bands of that era, such as Crosby, Stills, and Nash. He has played in church for much of his life but has also always had a love for folk music which never had much of an outlet before his moving to Fort Myers, where he is now the Technical Arts Manager at Shell Point’s new Tribby Arts Center and is an on-camera Anchor on their daily in-house TV show. The founding of the Americana Community Music Association opened a door of opportunity to develop and share his music in a community of folks who are also passionate about this genre. Though he dabbled in song-writing earlier in his life and had a few songs to his credit, the inspiration of the ACMA’s songwriter’s circle spurred him to write many more songs over the past few years. His playing has also developed to a higher point in the last decade and he says that, with age, his voice is finally starting to cooperate as well. Dan’s songs are based on his observations of life and the beauty he sees in the world. They deal with the challenges of life honestly, but always attempt to leave the listener with hope.
If you are able to help provide financial support, there will be a link to donate under the video. Any level contribution from couch change up helps keep our less fortunate friends and neighbors from going hungry during these tough times. Just watch this page for the red Facebook LIVE icon!
+ Google Calendar+ iCal Export