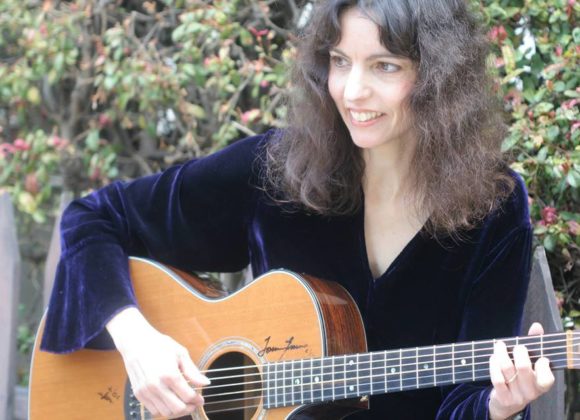 “Like Joni Mitchell, Helen Avakian can turn lyrics inside out… Avakian writes music that remains gentle on the ears while pulling aggressively on the heart… Helen Avakian’s music touches a place within.” Poughkeepsie Journal
“A charming and engaging real artist, Avakian makes some really meaty listening that is as far from disposable pop as you can get.” Midwest Record
Helen Avakian performs an exciting array of original songs and acoustic guitar instrumentals. Her stage presence is alternately enchanting and down to earth as she takes her listeners on a musical journey from the US to China, Brazil, Ireland and other parts of the world. She is joined by her partner in music and life, guitarist/vocalist/percussionist, Dave Irwin.
Helen is the 2014 International Fingerstyle Guitar Champion, and the first female to win this prestigious competition. In addition, Helen was voted Favorite Acoustic Act four times by Rhythm and News magazine in New York, and her songwriting awards include seven first prizes from the NewSongs Contest at the Walnut Valley Festival in Kansas. Appearances include PBS radio and TV as well as on stage with Peter Yarrow, Mary Fahl (former lead singer of The October Project), Chris Trapper of the Push Stars, guitar stars Pete Huttlinger and Muriel Anderson, and actresses Vanessa Redgrave and Rachel Kempson Redgrave. She has opened for Mary Chapin Carpenter, Stanley Jordan, Marshall Crenshaw, Imogen Heap, Adrian Legg, Tom Chapin, and John McCutcheon among others.
Helen’s latest recording, “Notes from Helen,” recently made it to the finals of the Just Plain Folks Awards 2010 – 2016 for “Best Guitar Album” and has received this praise: “ Notes from Helen is an extraordinary CD, ranking with the very best fingerstyle – or any style – guitar albums.” Minor 7th Helen has received raves from reviewers who call her “a rising star,” and a “guitar goddess.” Acoustic Guitar magazine describes her playing as “impressive… full of life and energy.” Helen’s previous album, “I Love the Moon,” also received much acclaim and radio airplay. Elmore Magazine called the CD “new and exciting…indelible songs centered around a girl and her guitar, singing what matters most.”
Helen had the great honor of having her guitar and vocals featured on track 1 of Pete Seeger’s Grammy-nominated final album of his life, The Storm King. On a more technical note, Helen is a proud 17 year participant in the artists’ endorsement program for Elixir guitar strings.
“Helen Avakian has what it takes to rise to the top of the hill. A gifted guitarist, composer, and storyteller, she also has a pure clear voice with its own identity.” Kate Goldsmith, Taconic Weekend
http://www.helenavakian.com/index.shtml

4 year ACMA member Chuck Willliams opens the show! Chuck Williams has been appearing throughout New England and in recent years has gone coast to coast with his music. Raised in Toledo, Ohio, Chuck has lived most of his adult life in the Berkshire Mountains of Massachusetts, moving to the Buzzards Bay shoreline in 2002. His writing has been gaining notice throughout song circles and he has earned several awards for his finely tuned craft. He can take you on a journey that makes you think, smile and at times want to cry. He has been traveling to coffeehouses, performing arts centers and festivals sowing seeds of his songs along the way.

Chuck’s lyrics and melodies are a musical journey reflecting emotions of everyday life brought to you through the stories within his songs. If you feel his style is rooted in the American folk-rock tradition, you would be on the right path that leads to this musician’s memorable songs.

Chuck is the President of the Rhode Island Songwriters Association. He is also a member of Folk Alliance, NERFA and ASCAP

Williams employs a voice that resembles Neil Young’s with the edges rounded-off. There seems to be a proud and strong tradition of folk music speaking truth to power within his tunes. Don DiMuccio, Motif Magazine