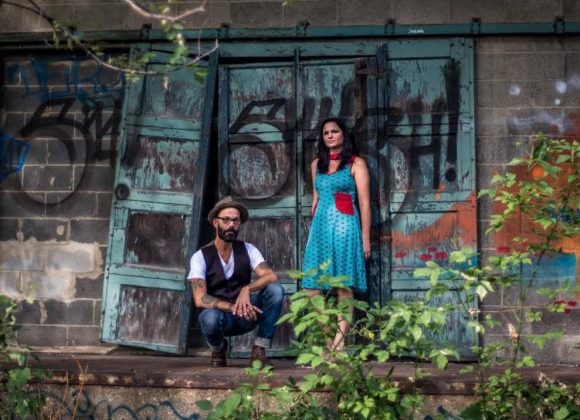 “Excellent music. Absolutely beautiful vocals. Humid and hot with ice cold lemonade up against your sweaty cheek musicianship. Yeah…back porch, black cat moan type mood done quite successfully.” (No Depression Magazine)
The Hummingbirds are husband-wife team S.G. and Rachel Wood. Born and raised in Detroit, now residing in Tampa, their music is both northern and southern Americana, blending both grit, and self reliance with hospitality, and charm. They play old guitars through old amps, bang drums, and even pluck banjos sometimes. Their live stage chemistry and organic duo harmonies immediately captivate and charm audience members while Rachel’s solid command of rhythm guitar, peppered with S.G.’s thoughtful lead work, keep their songs rolling in true Americana form. S.G. and Rachel were fans of classic country music, as well as myriad of other genres when they started their band in the early 2000’s. And while they continue to draw on these influences, what comes out in their own songwriting is a hybrid sound all their own, genuine & playful, earnest & soulful. Their songs twist through tales of loss & heartache, while others whisper sounds of hope, love, and journeys from the road. Through the past years, The Hummingbirds have been doing it all.
They’ve played for small crowds in smoky bars, and large concert venues for hundreds of people. They present their songs to welcoming audiences at hospitals and intimate house concerts. They enjoy the excitement of singing live on radio and performing at festivals throughout the country. Their enthusiasm for music and songwriting has even lead them to found a songwriting workshop in Northern Michigan for other songwriters passionate about the craft called, “Above The Bridge Songwriter’s Weekend.” Their newest album, “13 Days” released in 2015 features 13 songs about rivers & rattlesnakes, the cold & the road, and heartaches & love. Recorded & mixed by Grammy Award winner, Mitch Dane in Nashville, the recording is delivered with a touch of twang and a rootsy, raw, alt-country vibe.

ACMA member Bill Veach opens:
Bill Veach was a drummer in a rock band in college, but guitars are easier to move and make for better neighbors so he spent $100 of his precious college beer money on a flame red acoustic guitar. Moving was a part of his life for years, with a love of travel that is expressed in many of his songs. His songs are often autobiographical, about his experiences, travel, love, loss and some characters he has met on his journey. Bill is a Western boy, raised in Colorado and lived in Utah and Wyoming before becoming a full time resident of Fort Myers Beach. He became active writing songs as part of the Cheyenne Guitar Society in Wyoming and finds inspiration in the camaraderie of the ACMA Singer Songwriter Circle on Sundays. Bill has never met a genre he didn’t like, and his style