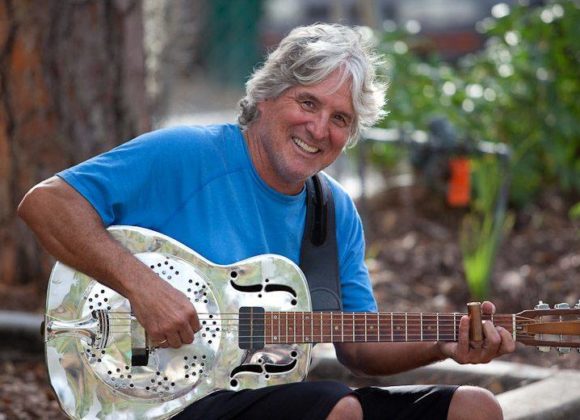 Call him Contemporary folk, Acoustic blues, Roots rock, or American fingerstyle. The fact is, Kraig has managed to merge a bit of all the above, while maintaining a close and personal connection with his audience. Kraig has played up to 200 dates a year touring the US for the last 3 decades, showcasing songs from his eight cds containing almost exclusively original material.

Kenning has shaped himself into one of the most capable performers on the planet. “There is an exchange at a spiritual level in a great performance. My goal is to journey with all my listeners to this magical place.”

At National Guitar’s 1st Annual Slide Competition, Kraig took first place honors as Best Unsigned Artist. He has opened for Mick Taylor of the Rolling Stones, and slide guitar master Sonny Landreth; and he has shared lineups with club and folk series favorites such as John Gorka and Patti Larkin.

Kraig has played some of the nation’s largest, most respected music festivals, as well as classic clubs like the Vic and Fitzgeralds in Chicago. You might also find Kraig performing at traditionally smaller venues including public librarys state parks and dinner clubs. “The atmosphere is genuinely intimate, and fits my music and lifestyle.”
www.kraigkenning.com

ACMA’s own Ross Jordan opens
Ross has been writing songs since he picked up a guitar at age 10. He went on to study music and classical guitar at Rutgers University. His songs reflect the regional influences from all of the parts of the country that he has lived from New Jersey to the West Coast o the Mid-West and now Southwest Florida, His songs feature catchy tunes and lyrics and audience members can often be seen dancing and swaying and singing along while he performs.