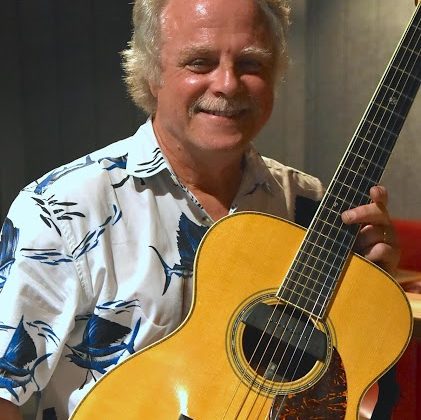 “I first heard him on the radio and got upset. Then I heard him in concert and got more upset. He thinks harmonically, improvises beautifully, and writes. If you’re a guitar player, he’s going to haunt you…” —Leo Kottke

Pat Donohue’s devotion to acoustic guitar has made him an American standard. A versatile guitarist’s guitarist, he plays it all with a flourish of artistry and melodic inspiration. Pat entertains fans with intricate fingerpicking, easy wit, and nimble interpretations of old blues, swing, R&B and original tunes. Chet Atkins called Pat one of the greatest finger pickers in the world today; Leo Kottke called his playing “haunting.”
Pat is certainly one of the most listened to finger pickers in the world. As the guitarist for the Guys All-Star Shoe Band of Minnesota Public Radio’s A Prairie Home Companion, Pat got to show off his savvy licks and distinctive original songs to millions of listeners each week. His decade-long association with Garrison Keillor’s popular program led to some unusual gigs: There was the after-show club date in Berlin, when Wynton Marsalis showed up to sit in with Pat and the Prairie Home band. Or playing music on camera for the Prairie Home Companion movie with director Robert Altman and stars Meryl Streep, Lily Tomlin, Kevin Kline, John C. Reilly, Woody Harrelson and Tommy Lee Jones. Today Pat plays concerts nationwide and teaches at such popular music camps as Augusta Heritage Center and Rocky Mountain Fiddle Camp
Pat’s musical tastes are eclectic. Though he considers himself foremost a folk guitarist, Pat’s in uences are rooted in bluesmen Blind Blake, Robert Johnson, Charlie Parker, Duke Ellington, Muddy Waters and Miles Davis. He manages to blend jazz and blues with folk, and the mix is seamless. Over the years he has captivated audiences with his unique original compositions, dazzling instrumentals and humorous song parodies, including Sushi-Yucki and Would You Like to Play the Guitar?
Honors include a 2005 Grammy for his participation on Pink Guitar, a compilation of Henry Mancini tunes on acoustic guitar, several Minnesota Music Awards, and the title of 1983 National Finger Picking Guitar Champion. His original tunes have been recorded by Chet Atkins, Suzy Bogguss and Kenny Rogers. Pat has also been a featured performer at major music festivals including the Newport, Telluride and Philadelphia Folk Festivals. Pat joins a legendary list of notables, as The Martin Guitar Company recently introduced a Custom Signature Edition Series OM-30DB guitar designed to his speci cations.
Pat has been obsessed with the guitar since he rst picked one up at age 12 and began learning simple chords and melodies from a Pete Seeger instructional book. His background as a drummer in a garage rock band helped with the transition and he never looked back. As a youth, the St. Paul, Minnesota native pestered guitarists playing at
Twin Cities coffee houses and blues venues, seeking tips on playing. Borrowing bits and pieces of the styles of nger picking pioneers he admired, he taught himself to play, building a repertoire avored by Blind Blake, Django Reinhart and Chet Atkins.
Pat’s latest CD release is “Blue Yonder” He is accompanied on some tunes by members of The Prairie All Stars, who were also members of The Guy’s All Star Shoe Band. There are also solo tracks on the CD, clever new original songs, as well as three new instrumental numbers.
THE MIDNIGHT SPECIAL with Rich Warren – February 6, 2016:
“Our live ‘Folkstage’ performer was Pat Donohue who received a very rare standing ovation from our audience. His droll wit, great sense of humor, amazing guitar picking and perfectly constructed set really pleased our studio audience. He’s been wasted all these years on PHC. He’s a great solo artist.”
www.patdonohue.com booking: musicalou11@gmail.com www.musicalouproductions.com
www.patdonahue.com

Opening for Pat is our own blues playing board member Mike McMillan. Mike’s work as one of our hard working board members is only surpassed by his deviotion to the blues…not only playing the blues but knowing the history of the songs.

Please join us in welcoming these two devoted musicians to our stage.