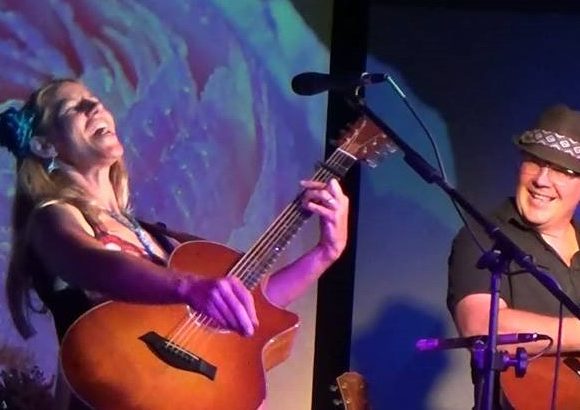 The ACMA is so pleased to have some of our founding member musicians return to our stage!
Internationally Touring World Radio Chart Topping Guitar Duo

In 2018 Patchouli & Terra Guitarra went global bringing their music all over the world touring the UK and Europe, China and the U.S. In 2019 their album Spirit Wheel was nominated ZMR “Best World Album”. The duo contines to tour across the U.S. and returns for a 2nd bigger tour in China in July of 2019.

Patchouli & Terra Guitarra have performed over 4,500 shows, toured a million miles on the road supporting 21 CD releases, performed on TV, film and are played on radio programs around the World. Their soulful fusion of blazing Spanish and world guitar instrumentals, heartstring tugging lyrics, lush vocal harmonies, and epic folk rock anthems infused with a visible onstage chemistry guarantees to make the night an uplifting one of music that will leave you uniquely inspired and excited to pick that old guitar back up.”

Founding member musician Andy Getch will open for Patchouli. Andy has been an important part of the ACMA since its inception…and he continues to volunteer for us, write new songs, paint cool stuff, host house concerts and perform on our stage!