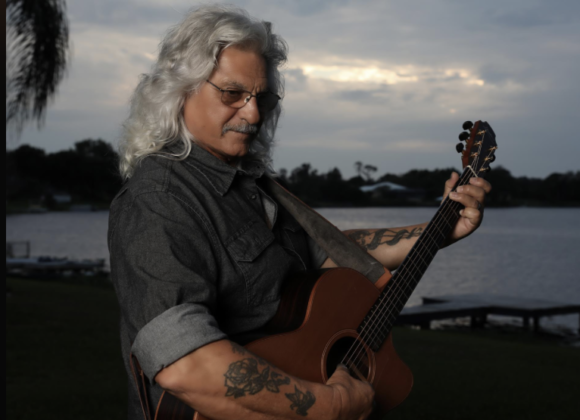 Join us right here at the ACMA FB Live Streaming Stage on August 1, 2020 7PM for Americana Music from Ray Cerbone!
During our time apart we can still enjoy music together! Ain’t technology great?
https://www.facebook.com/pg/Americana-Community-Music-Association-186132008151817/events/
Here’s a bit about Ray Cerbone
One of the founding members of the Fort Myers ACMA (Americana Community Music Association), Ray began playing guitar during the late 60’s folk scene. With the support and inspiration of fellow local and touring musicians, he began writing and playing in earnest in 2010. Traveling a long road in a short time, his music encompasses many genres, including Americana, Folk, Blues, Ballads, and a little bit of Country. His storyteller style takes the listener to another place in time, his music and lyrics bringing evocative insights into the many sides of life. Ray is also a singer-songwriter’s song-singer. That is, he does interpretive covers of other great originals by little-known but very talented artists using his own creative touch. His inventive fingerstyle guitar is uniquely diverse and easy-on-the-ears.
Ray’s recently released CD, “How Much Time” has received glowing reviews and is being featured on KEOS Radio in Austin, Texas, 98.1 as well as others. He has shared the stage with Jaime Michaels, Pierce Pettis, Muriel Anderson, Rebecca Folsom, Jefferson Ross, Brian Smalley, as well as Roy Schneider and Kim Mayfield (The Reckless Saints), and Robin O’Herin. He has performed at several Florida Folk Festivals in SW, Central, and Northern Florida as well as house concerts, and the BMI sponsored “Island Hopper Festival” in Ft. Myers.
Ray fronted “The Apocalypse Blues Revue”. A hard hitting blues rock band formed by Shannon Larkin and Tony Rombola of “Godsmack” fame. The band was signed to Mascot/Provogue records and under that sign released two full length records, both reaching number two in the blues charts. Over 6 years the band played blues festivals and blues venues on both coasts. They opened for Steven Tyler, Robbie Krieger of “The Doors”, The Blue Oyster Cult, and did two tours with Kenny Wayne Shepherd.
Ray is currently working on his second solo project which will once again cover the full range of “Americana” music!
Ray’s website is www.steelonwood.com
Join us right here at the ACMA FB Live Streaming Stage on August 1, 2020 7PM for Americana Music from Ray Cerbone!
+ Google Calendar+ iCal Export