The Reckless Saints with The Pearl Street Band opening. 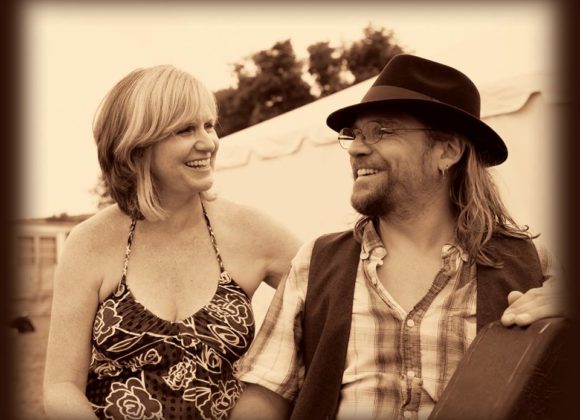 It’s our absolute pleasure to welcome The Reckless Saints back to our stage as we kick off another year of Americana concerts. Roy Schneider and Kim Mayfield are the Reckless Saints and have been an integral part of the ACMA since our beginnings. As we’ve grown as an organization, they’ve continued to grow and hone their craft of creating a style of music they call blue twangled folk n roll. Opening for The Reckless Saints is ACMA’s own Pearl Street Band. This is gonna be one mighty fine night

Reckless Saints Bio:
:Former syndicated cartoonist Roy Schneider has found his true calling in writing and performing his “Blue-Twangled Folk & Roll” music. Schneider has developed a loyal fan base through national radio airplay and consistent touring, performing his blend of the gritty, soulful and sweet to delighted audiences all across the USA and places abroad. He appears most often with Kim Mayfield providing harmony vocals and accompaniment on mandolin, percussion, and piano. From house concerts and folk clubs to festivals and theaters, the duo – gradually becoming recognized as ‘Schneider & Mayfield’ – clock up thousands of miles annually in their van “Ulysses” toting guitars, harmonicas, banjos, mandolins, pianos, and assorted percussive things wherever they are needed.

“Roy Schneider is a singer-songwriter in the grandest tradition of Steve Earle, Lucinda Williams, Guy Clark, and Lyle Lovett, but his voice, songwriting skill, stagecraft, and instrumental talent are all his own. Together, the result is like a vibrant jubilee singing out on the banks of the Mississippi River. His gift for blending Southern-influenced folk, blues, country, and rock into a seamless genre with his own signature sound demonstrates his connection to the best in the tradition of fine wake-me-up and kick-me-in-the-ass roots music.”

Opening for The Reckless Saints is The Pearl Street Band. The band is comprised of Bob Williams, Mike McMllan, Bill Veach and Clark Johnson. This band is made up of all ACMA members. They perform regularly on Fort Myers Beach.
Bios: Bob Williams: In the late sixties, Bob Williams, a young guitar player from Long Island, NY, began writing his own music. Pulling elements from Folk-Rock and Country-Rock, Bob created a sound all of his own. Always eager to share amusing stories behind the lyrics, Bob’s songs are personal. Irreverent. Funny. Sad. And most importantly, true to his heart. With encouragement from family and friends, he produced and released his first CD No Apologies in 2015. In 2018 he released his second Album, Ain’t Sorry Yet.
Mike McMillan: Started playing guitar at age 13. He enjoys many different genres which has also influenced his original compositions. Keith has been both a band leader and a sideman and enjoys backing others on guitar and vocals when the opportunity presents itself. Keith also has a passion for writing, co-writing, arranging, recording and performing original music.
Bill Veach: Bill Veach was a drummer in a rock band in college, but guitars are easier to move and make for better neighbors so he spent $100 of his precious college beer money on a flame red acoustic guitar. Moving was a part of his life for years, with a love of travel that is expressed in many of his songs. His songs are often autobiographical, about his experiences, travel, love, loss and some characters he has met on his journey. Bill is a Western boy, raised in Colorado and lived in Utah and Wyoming before becoming a full time resident of Fort Myers Beach. He became active writing songs as part of the Cheyenne Guitar Society in Wyoming and finds inspiration in the camaraderie of the ACMA Singer Songwriter Circle on Sundays. Bill has never met a genre he didn’t like
Clark Johnson
Born in NYC at a very early age. Picked up bass in 7th grade (Beatles, etc.). Blues bands all through college. Rock/Folk most of the rest of the time. Since moving to FL, play in bluegrass and country bands.