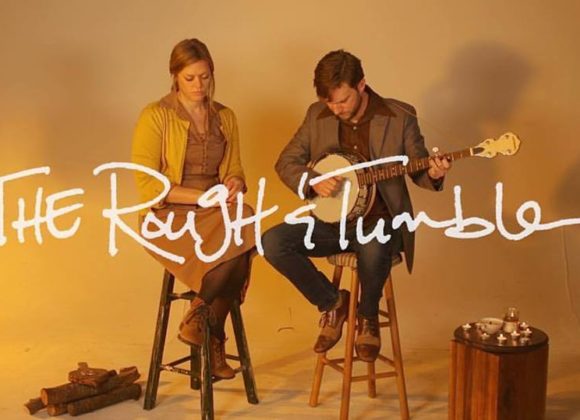 …used to say they were from Nashville, TN. That was before April 2015 when 5 year members Mallory Graham and Scott Tyler quit their day jobs, sold everything they owned, and gave their thirty day notice on their rental house to trade in for a life permanently on the road. With their sixteen foot camper and their 88 pound dog, Butter, they have been touring nationwide. Don’t let their vagabond tendencies fool you– this americana-folk duo are a compact team of close harmonies, versatile instrumentation, and deliberate songwriting all presented with a nudge of the elbow and a tongue in the cheek. Haunting, quirky, solemn, and spritely, The Rough & Tumble are for the faint of heart and the strong of will.

In 2011, the friends-turned-bandmates released their first EP, We Sing in Your House When You’re Not There… we even ordered pizza., an exploration of watching other people’s dogs while eating other people’s food. Shortly after, the duo released their second EP, We Don’t Believe in Monsters, Anymore… but will you please check under our beds?, wherein the band discovered that they did, in fact, still believe in monsters. In 2012, their third EP, For You, Now That You’re Married… and for me, too., generated a sudden foreshadowing for the band, still noted in history books as the time they knew everything they didn’t know.

2013 proved to be a small miracle as The Rough & Tumble met their deadlines and wrote, recorded, and released two songs a month every month. The result was The Rough & Tumble’s Holiday Awareness Campaign, a project that fought for the underprivileged, uncelebrated holidays in the calendar year. While having fun with days like Meteor Day and Boxing Day, The R&T additionally observed the great sadness that can accompany great celebration with A Day for the Remembrance of the Souls of Lost Whales and Evaluate Your Life Day.

In 2014, filmmaker friend Alyssa Pearson asked the duo to create a soundtrack for her upcoming film, Pieces and Pieces. Up for the challenge, the songwriters took on the task, tackling issues of PTSD, women’s rights, war, and the love in between. While the film is still to be released, The Rough & Tumble released the seven songs, dually named Pieces and Pieces, on March 1, 2016.

As they closed out their second year as full time road musicians, The Rough & Tumble managed to squeeze a fourth companion into their 16 foot camper– an 81 pound rescue pup named Pud. They made room for a few more songs, too, as they released Cardboard and Christmas Lights in February 2017, a 7-song EP compiling the earliest and latest years of their career, creating a song-by-song education of the less studied R&T fans, while adding a few new songs for the devout.

The Rough & Tumble announced that a new record is due in January 2018, titled We Made Ourselves a Home When We Didn’t Know. The full length record was recorded over their 2017 winter with Dave Coleman in East Nashville. More details will follow with a few music videos to accompany. But for now, likely, any minute now, they will be in a town near you, singing sad songs and telling bad jokes until the next town calls them.

TerryLynn Melody began her musical performance career as a child in her hometown of New Bern, NC. Her mother, a NY Performing Arts graduate and professional singer was her role model and teacher. Later in life, guided by a need to find her voice an an artist, she began exploring songwriting as a means to tell her story. The resulting songs are an ever growing catalog of original material. This year she took the leap to put some of those songs on record and August 1st 2016 she released her self produced debut CD “Counting Daydreams” Nashville hall of fame great Charlie McCoy appears on several the tracks as does 2014 NZCMA Male Artist of the Year Phil Doublet. The album spans country, blues, folk and pop and is an eclectic collection of some of her favorite songs from the past 15 years of writing.

Grammy Winning Songwriter Otha Young said “TerryLynn shows a tremendous innate understanding of the essence of compelling song writing. From her heart and mind, lyrics and melodies flow that evoke the most warmly remembered sensibilities of modern American folk. Her songs are finely crafted but have a raw quality that is delivered with intelligence and captivating emotion “