Roy Schneider, Kim Mayfield, Ray Cerbone in the Round at Shell Point 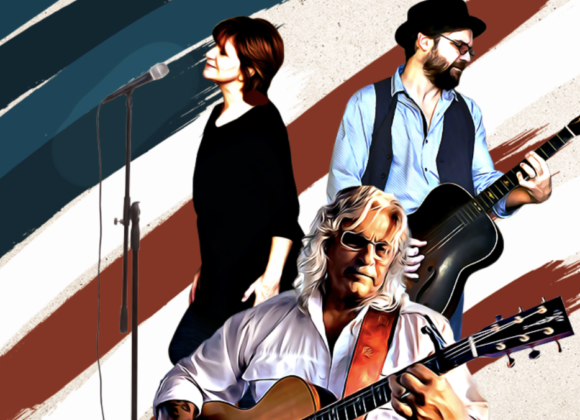 As part of the ACMA Acoustic Festival at Shell Point Retirement Community we are pleased to announce this trio in the round to the Tribby Arts Center Stage:
Roy Schneider, Kim Mayfield and Ray Cerbone!
Founding member of the Americana duo Reckless Saints, Roy Schneider, has been performing his original music for the past two decades. His songs have thrice made him a Kerrville NewFolk finalist, and in 2013 a contestant on NBC’s The Voice. No Depression described Schneider as ‘a songwriter in the grandest tradition of Steve Earle, Lucinda Williams, Guy Clark and Lyle Lovett, but with a voice, songwriting skill, stagecraft, and instrumental talent all his own.’ He is currently at work on a new Reckless Saints recording.
Kim is better known as half of the Americana duo Roy Schneider & Kim Mayfield (now called Reckless Saints.) Reviewers have described her music as ‘pearly and sashaying,’ ‘pleasantly invoking the legendary Tammy Wynette,’ and ‘haunted by Patsy Cline.’ Mayfield’s song, Ring Around the Moon, made her a semi-finalist in the 2019 International Songwriting Competition. She is currently at work on a new Reckless Saints project to be followed by her first solo recording.
Ray Cerbone: many sides of life. Ray is also a singer-songwriter’s song-singer. That is, he does interpretive covers of other great originals by little-known but very talented artists using his own creative touch. His inventive fingerstyle guitar is uniquely diverse and easy-on-the-ears.
One of the founding members of the Fort Myers ACMA (Americana Community Music Association), Ray began playing guitar during the late 60’s folk scene. With the support and inspiration of fellow local and touring musicians, he began writing and playing in earnest in 2010. Traveling a long road in a short time, his music encompasses many genres, including Americana, Folk, Blues, Ballads, and a little bit of Country. His storyteller style takes the listener to another place in time.
Ticket price: $20 Open to the public
Purchase tickets: www.tribbyartscenter.com
Box Office: (239) 415-5667
The Tribby Art Center at Shell Point is an amazing state-of-the-art auditorium with a seating capacity of 400. Once you walk through the heavy oak doors the acoustics are astounding, creating a perfect space for concerts. Along with the top-notch lighting these shows …..picture perfect!
Tribby Arts Center at Shell Point Retirement Community
17281 On Par Blvd.
Fort Myers, FL 33908
Doors open at 6:30 PM. Seating is first come first served.
There is no bad seat at this venue!
The ACMA will follow the COVID guidelines of our host venue.
+ Google Calendar+ iCal Export