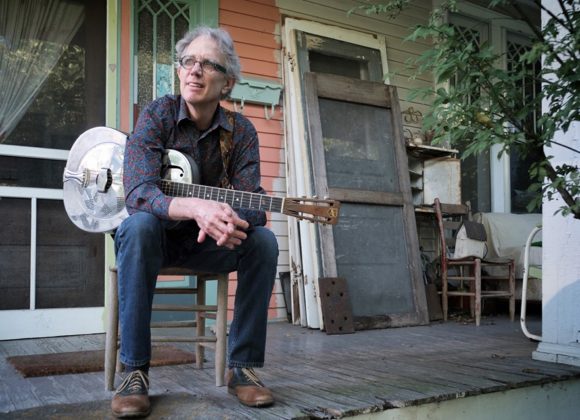 Another enthusiastic and unanimous thumbs up from the ACMA music committee snagged Billy a spot in our “high season” line up…Check him out!
A Baltimore native and Tennessee resident, Billy Kemp is a musician, songwriter, singer, composer and producer. He is a multi-instrumentalist but is best known for his tasteful and inventive guitar playing. He performs passionate home made songs and compositions, mostly roots music.

Billy first made points in his hometown by forming the Paradise Pickers, a hybrid of country and rock which released one record in 1980. During the ‘80s, Billy followed his heart and went to Nashville. While based in Music City, he toured internationally with Tommy Overstreet, Terri Gibbs and Bandana. In town, he performed on the Grand Ole Opry with Jeanne Pruett.

Billy returned to Maryland in 1988 and released one album with the reformed Paradise Rockers before landing the spot as lead guitarist for renegade rock-n-roller Tommy Conwell and the Young Rumblers living the rock-star lifestyle. He composed and recorded music for Maryland Public Television and produced numerous CDs for regional artists in the Baltimore/DC area.

He also recorded and released two CDs on his own label, Willbilly Records. In 2000 Billy formed a new roots-rock ensemble, Willbilly—his nickname in high school because of his love for country, folk and blues music. He also expanded his role as a producer and studio-owner, establishing a successful recording facility in rural Maryland.

Billy released a new solo CD, Another Life in August of 2017.

In 2018, Billy released The Painter’s Bucket, a collection of previously released and unreleased songs from 1983-2018.

His concerts include songs from his latest releases, as well as selections from a rich and extensive back-catalogue. From Lone Star country to urban shuffles and Appalachian waltzes, Billy remains a songwriter with a love of story.
https://www.youtube.com/watch?v=kDIcMb0fiwc&feature=youtu.be
www.billykemp.com

Opening musician Bill got his first guitar in 1963 — the 60’s may have left him, but he never really left the 60’s. As young people do, he bounced around from school to army to nowheresville —
Somewhere along the line he picked up a “Travis” style for the right hand. He never performed or wrote songs. He worked for a resorts company in Ft. Lauderdale, finally retired to Ft. Myers and discovered ACMA and the songwriters circle.
That is why you see him here today.
Totally a product of ACMA!