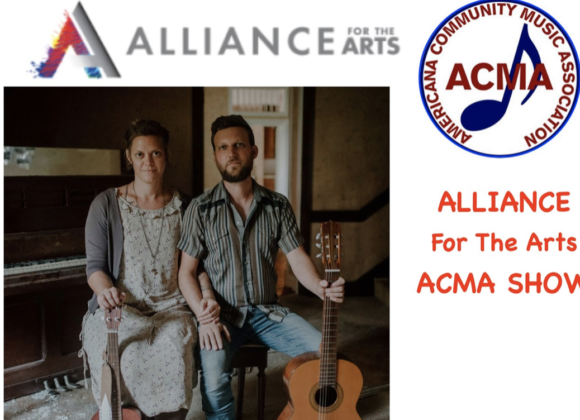 ACMA member Carlene Thissen will open for The Rough And Tumble @ The Alliance for the Arts as part of the ACMA’s collaboration with the Alliance to present outstanding Americana music to the public.
How reservations work for outdoor concerts: The Alliance will be accepting the first 132 people for concert reservations. IF weather threatens the outdoor concert it will be moved to our indoor theatre for general admission seats. If there is no weather threat we will sell additional tickets at the door the day of the concert. Members $15/Public $16.  Tickets. www.artinlee.org
The Rough & Tumble aren’t casual road dogs, but they’re not letting on either. From their earworm melodies to their heartstring lyrics, this dumpster-folk/thriftstore Americana duo refuses to bring the haggard, road-worn stereotype to their audience– even though they’ve earned it. Mallory Graham and Scott Tyler formed The Rough & Tumble in 2011 and a few years later sold everything they could, bought a 16’ camper and hit the road with their two rescue dogs, playing roughly 150 shows a year to audiences across the USA and Canada. Equally at home in festival settings, listening rooms and house concerts, their commanding stage presence, sharp banter and engaging performances won them The Listening Room Network’s Artist of the Year award in 2019. Songwriters and storytellers, the duo will have you in stitches one minute and falling apart at the seams the next.
In February 2021 The Rough & Tumble dug into the severed branch of their family tree, releasing their newest album, We’re Only Family If You Say So, a full length record about what it takes to be family– and what it means to lose it. With a single debuting on The Bluegrass Situation and Grateful Web referring to the album as “a must listen,” it has been embraced by fans for its stark honesty, unique storytelling and well-crafted melodies, especially at a time when families are deeply divided. The new record follows 2019’s Howling Back at the Wounded Dog, an album to which the response was audible, with audiences literally howling back at performances coast-to-coast, and whose opening track “The Hardest Part” won the Independent Music Awards’ Best Americana Song of 2019.
During COVID hiatus the Rough and Tumble continued to make music, produce CDS and maintain relationships through live streams, zooms and various other projects.
www.theroughandtumble.com
ACMA musician Carlene Thissen opens.
Carlene Thissen is a singer, songwriter and author in Naples, Florida, where she dedicates herself to performing, speaking and songwriting, singing and playing piano and guitar at house concerts, clubs, restaurants, festivals and charity events. Until recently, she also served the community as Coordinator of a Farm Labor Supervisor Training program at the University of Florida’s Research & Education Center in Immokalee.
Carlene performed in the 1960s and 70s as a young guitar-playing folk singer in northwest New Jersey, doing songs by Bob Dylan, Joan Baez, Judy Collins, Joni Mitchell and Melanie. She says the best three days of her life were spent at the Woodstock Music & Art Fair in 1969 and she presents a multi-media program today about that experience.
As she explains in her autobiographical song, Back There Again, this Woodstock hippie girl, “…cut her hair and got a career, and lost herself for 30 odd years.” Forgetting her dreams of being a doctor working in ghettos, she became a successful business woman, well known for speeches, articles and books about marketing technology. She ended her corporate career as Vice President for a large market research company in Chicago, became an independent international consultant and then moved to Naples, Florida.
+ Google Calendar+ iCal Export