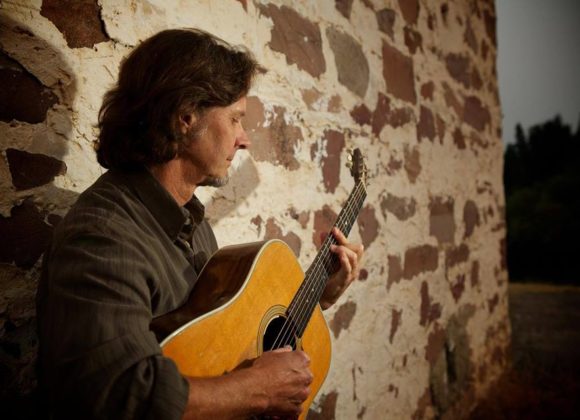 It’s not often the ACMA showcases an instrumentalist, but when we do..watch out! We are proud to present Grammy award winner guitarist Bill Mize.

Bill Mize is a son of Tennessee, and a fitting representative of his state’s rich musical heritage. His critically lauded fingerstyle compositions are fluid and intricate, and their delivery masterful. One suspects an influential teacher, and one would be right. “I received most of my musical education from a cheap Zenith radio,” says Mize, who as a child drifted off to sleep to the decidedly non-sleepy lullabyes emanating from Nashville’s WLAC and WSM and Knoxville’s WNOX.

Bill is a past winner of the National Fingerstyle Guitar Competition at The Walnut Valley Festival in Winfield, Kansas. Guitar Player Magazine has labeled this event the “U.S. Open of guitar competitions.” Bill received a GRAMMY Award for his collaboration with musician and storyteller David Holt on the recording Stellaluna, and has been featured on the popular guitar compilations “Windham Hill Guitar Sampler” by Windham Hill Records and “Masters of the Acoustic Guitar” by Narada Records. In 2009, Bill’s music appeared in the Ken Burns documentary “The National Parks: America’s Best Idea.” Mel Bay Productions transcribed Mize’s second CD, “Tender Explorations,” into a songbook, and his original compositions have been transcribed for Fingerstyle Guitar and Acoustic Guitar magazines.

Dirty Linen Magazine (Stephen Ide) – “… To call Mize guitar maestro would be understating his ability to transport listeners beyond what most guitarists can only hope to accomplish.”

Fingerstyle Guitar News, Canada – (Dave Walker, 2010) “One of the best guitarists around.”

Open for Bill Mize, is local songwriter Bill Burkert. Bill got his first guitar in 1963. After that the 60’s left him, but he never really left the 60’s. In his early days he bounced around a bit -school, army, nowheresville, etc.- somewhere along the line he picked up a ‘”Travis” style for guitar which he has been struggling with ever since. Eventually he landed in a resorts company in Ft, Lauderdale, retiring 12/31/16 and moving to Ft. Myers where he discovered ACMA and songwriters circle. As a songwriter and performer he is TOTALLY a product of ACMA!