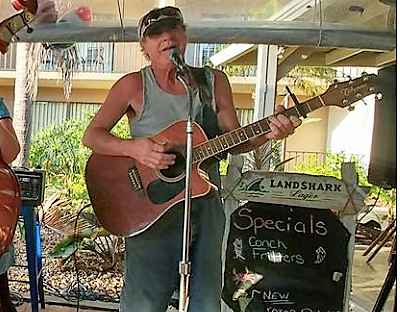 This Matlacha Invasion is on Friday night

Kip Lawrence is a songwriter living in Matlacha, and was a founding member of The Yard Dogs who put out 12 cd’s of original music which came to be known as Florida Swamp Music. The Yard Dogs toured extensively and brought their music to people all over the world. He wrote many of the songs along with his partners Yard Dog Charlie and Brian “Swamp Box” Travis.  In his early years he worked to help establish The Key West Songwriters Fest and created The SW Fla Songwriters Fest as well as The SW Fla Blues Fest. His latest project is his band The Skinny Water Seagrass Band which combines island music with bluegrass. However, he is semi-retired and writes every day at his humble abode in Matlacha, FL with the hope of someday writing a song which will make him a millionaire. Until Kip’s makes it big, why not join us for what is always a night of incredible music from one of S W Florida’s best songwriters.

Opening for Kip is, Alan and Cindy Bickford, aka Native Kid, were both born and raised in South Florida.  Alan grew up fishing the waters of Biscayne Bay and the Keys with his parents and grandparents. After a career as an engineer with ATT, he picked up his guitar again and started writing about his life experiences.

The inspiration for his songs come from family, friends, and his Florida roots.  All of his songs are written about life at no more than five feet above sea level.  Cindy sings the stories Alan writes about.

Cindy is a retired special education teacher.  They grew up in the same Hialeah neighborhood and attended the same elementary and jr high school.  They have been married for 40 years.  Their grandchildren are 4th generation Floridians.

They are also part of the band Pine Island Sound, which performs regularly at the Olde Fish House in Matlacha. They have also played for Calusa Land Trust, Matlacha Hookers, and the Holiday House at Tarpon Lodge.  They currently enjoy old Florida living on the water in St James City.