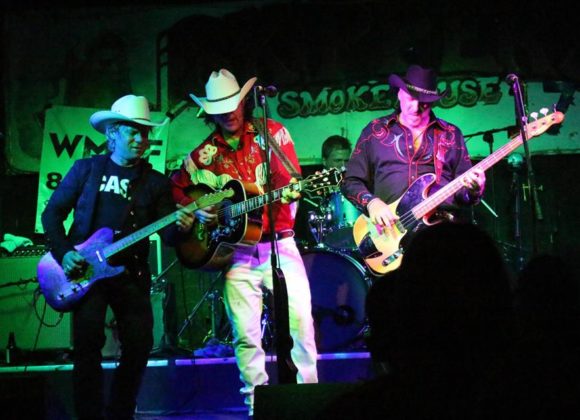 Cottondale Swamp is a Florida Swamp Rock, Southern Americana, Outlaw Country Band from the swamps of Florida. Weeki Wachee, FL is our ground zero. Mermaid Shows and the Gulf of Mexico, it doesn’t get anymore “Old Florida” than that. Original Florida swamp rock with authentic country sensibilities and a heart of rock ‘n roll.

Cottondale Swamp celebrates the back roads, small towns and the seedy underbelly of Florida. We write songs that celebrate the people, places and uniqueness of our southern most state.

Cottondale Swamp is fronted by Kenny Grube who has been an Elvis Tribute artist for the last 10 years. Kenny is the real deal! His voice has an authentic southern drawl that expresses the years he has endured paying his dues on the B, C, and D circuits of the southern United States. He is backed by an equally experienced band of road warriors. All of whom have been plying their trade in the trenches and (at times) the pinnacles that come your way when you’re a musician relentless in pursuing the dream.

WHO IS HE? – Robert is foremost a songwriter – composer/lyricist, producer, playwright, singer, guitarist, and former professional musician. He is a writer of almost all genres of music. He has been writing since he was 13-14 years old after he learned a few chords on a guitar he bought with money earned delivering newspapers. Never considered a prodigy, his classmates considered him most likely never to succeed… he has at least fulfilled that one promise. But Robert never quits and there’s still hope.

PERSONAL – Robert is married to wife (Janis) and has one daughter (Kimberly). Originally from Nebraska, he has languished in Florida (mostly) for 35 years. Rumors circulate that he is grumpy (according to his wife), irritable (per his daughter), and getting worse the older he gets (so sayeth his neighbors). Surprisingly, he considers himself an affable man when around friends. His mother believes he is the best.

ASSOCIATIONS/AWARDS – Robert is a former member of the Nashville Songwriters Association International (why, he does not know), ASCAP (why, he does not know), and has been associated at times with Southern heritage and Christian music. Publishers hate him, musicians laugh at him, and professionals scoff at his lack of success. He has, however, received some music awards in his life, along with recognitions and acclaims (probably fictitious). His goal is to move to East Nashville and live among other writers, whine along with them, and continue to enjoy life.