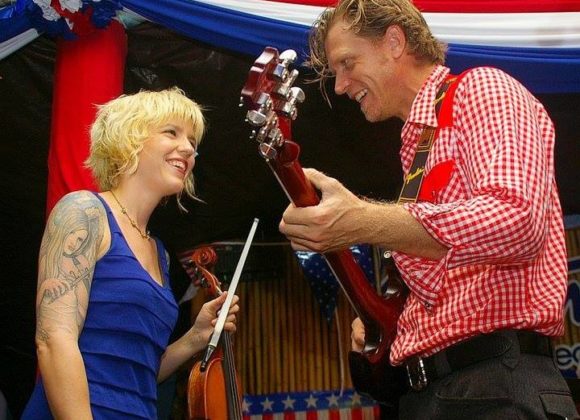 They were so much fun the first time we asked them back again! With their classic “Its roots that rock and roll” sound the Honkies make a joyful noise!. In mid 2014, Rebecca Dawkins and Tim O’Donnell, of The Nouveaux Honkies, hoisted anchor and set sail in their rebuilt RV. The journey started in South Florida and took them as far west as the Rockies, as far north as the Great Lakes, as far east as Cape Cod, and returned south for the winter. It’s been somewhere around 150 thousand miles, 600 shows, and at least one million smiles that has influenced The Nouveaux Honkies and their Loud In Here CD release in March of 2018. The New Year will also see TNH with a permanent residence in Knoxville, TN. O’Donnell says, “We based out of Tennessee the last two summers and fell in love with the Smokies. Knoxville will be a wonderful spring through fall hub for traveling and we also love this little city.” Their 2015 release, “Blues For Country,” masterfully blended styles. Their new release, “Loud In Here,” is a continuance of that same concept, respecting the greats and creating their own gumbo, which reveals a highway of influences.

Opening for the Honkies are ACMA members Sylvia and Pete>
Silvia and Pete have been playing music together for the past twelve years, originally as members of Skeeterland Band and Banyan Bluegrass, then gradually developing into a guitar and mandolin duo that incorporates a variety of musical genres, including folk, country, Cuban/Latin, and , yes, bluegrass. Always experimenting, adapting, and progressing from their roots in rock and traditional Cuban music, Silvia and Pete have created a style that is uniquely theirs, while remaining faithful to the many sources of their music.