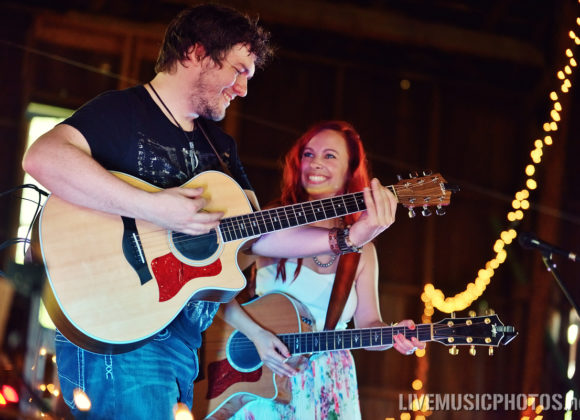 Don’t let the optimistic take on life in Danika’s music fool you into thinking she’s never endured hardship. She has… and plenty of it. She just chose to focus the message of her music on overcoming challenges and getting through life’s hardest moments in one piece, and being better for it. Danika believes music has the ability to heal. But that’s not all. A well written song and performance can lead you to sing along, to laugh, or to bop your head and groove with the beat. That’s what you can expect from a Danika Holmes show… not just songs, but an experience to remember.

In 2010, Danika joined forces with guitarist Jeb Hart, a phenomenal player who’s not afraid of shredding on an acoustic guitar. Jeb’s clean and sophisticated style of playing along with Danika’s smooth, soulful vocals has created their own unique blend of acoustic pop. Fans come to Danika shows expecting to hear Jeb Hart on guitar the same way they know they’re going to get Slash at a Guns N’ Roses concert.

While the music is positive and encouraging, an occasional song veers to the dark side, addressing heartbreak and death, in particular the loss of Danika’s dad to cancer, while showing a very real and genuine side to the singer-songwriter. “Balance Vol. 1” (2014) is the Nashville duo’s most recent release and was generously fan funded through kickstarter, as was their most recent full band release “Living Your Dream.” (2010) Danika grew up as one of five kids on the Mississippi River in a little piece of heaven known as “Iowa.”

Jeb Hart is the creator of Six Month Guitar.

Jeb started playing music at age 9, starting with saxophone and then later adding guitar, bass, and drums. Throughout the years he has learned many more. In his college days he spent many hours in the studio writing and recording songs.

Jeb also filled in with hundreds of bands including blues, rock, metal, country, and even a 2 1/2 year stint with a big band. He has taught for 16 years, and has decided to perform full time with Danika Holmes. Jeb stated, “It’s taken a long time to find a band that was worth pulling away from teaching for. I’m excited to see where we go in the next few years.”