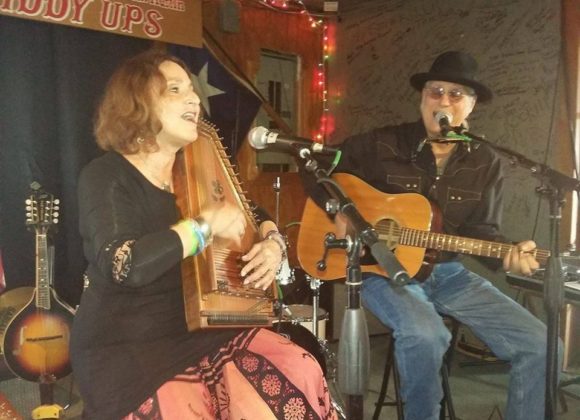 The ACMA is proud to welcome back Hank Woji and Eileen Kozloff to our stage. The duo has performed regularly at festivals, concert venues, coffee houses and house concerts throughout the country combining their stellar individual skills into a duo that showcases the best of their talents into a seamless collaborative musical team.

About Hank Woji
A self described “Jersey Shore Ex-Pat turned West Texas Desert Rat”, for over 20 years, as a bassist, Hank Woji played in some of The Garden State’s most dynamic and innovative bands, performing in clubs and concert halls from Virginia to Ontario, in styles ranging from Blues and R&B to Reggae and Rock & Roll to County Rock and Afrobeat!

In the Spring of 2001 Hank moved to Houston, TX, fell in with a bunch of great Texas songwriters, picked up his acoustic guitar, and found a new musical voice as a Singer Songwriter. But destiny turned a page and it was his chance move, in 2009, to the far West Texas desert town of Terlingua that has most reshaped his life and his music.

Critics have described Hank’s music as “acoustic-wielding, sharply observed, Americana all the way” and being “in the best tradition of the Texas troubadours like Guy Clarke, Townes Van Zandt and Butch Hancock” and that “His troubadour style also comes very close to the style of Woody Guthrie or Pete Seeger, or as we heard on ‘Nebraska’ from Bruce Springsteen.”

Hank has released five self produced CDs: Medallion 2005; American Dreams 2008; There Was A Time 2010; Holy Ghost Town 2013; and The Working Life 2014. He has also just produced, Just Words, the new CD by Florida based singer songwriter Eileen Kozloff, in 2017

Hank is a proud member of AFM Local 1000 and tours nationally, performing regularly at festivals, coffeehouses, theaters, clubs and house concerts as a solo singer songwriter, with his duo partner Eileen Kozloff as Woji & Kozloff, and with his full band The Hank Woji Conspiracy.

About Eileen Kozloff:
An award winning artist, for her singing, songwriting and instrumental work, Eileen Kozloff is a multi-instrumentalist who has been actively involved in the autoharp world for over a quarter of a century. She is best known for her unique “pick-less” style of diatonic autoharp and for her soaring vocals, stunning harmonies and commanding performances. Her ability to compose, play and sing in a wide range of genres has made her a versatile festival performer and workshop teacher.

Her extensive repertoire is a rich mix of Old Time chestnuts, Carter Family songs and her original compositions, which stylistically run the gamut from country, blues and folk to jazz and even rock and roll! The Old Time Herald calls her singing approach “emotive, clear and controlled, reminiscent of the best of the revivalists, such as Joan Baez or Anne Hills”, and her performances ‘heartfelt, with ravishing, wide ranging vocals.”

Eileen’s recordings have garnered stellar reviews and her discography includes two critically acclaimed CDs with her former band, Well Tempered String Band, as well as, two solo projects; “Solitary Rider” and “Hearts and Souls Entwined”. She is currently at work on her 3rd solo CD which is scheduled for release in early 2017.

ACMA board member and vice president Bob Williams opens the show. Bob has been a songwriter and musician most of his life. He discovered the joy of performing his own music at open mics and from then on, in his own words, “he was set free”. After joining the ACMA he rapidly became further involved in supporting local musicians by organizing ACMA events such as Songwriters at Sunset at Lover’s key, in conjunction with FOLKS, Songwriters at the South Regional Library and involving the ACMA with the Island Hopper Festival He also landed a regular “gig” at a local watering hole. He’s found time to produce a CD of his orginal music and is working on a second. All the while he continues to enjoy life with his wife Shelley Sue and their dog Murphy.
www.reverbnation.com/bobwilliams2