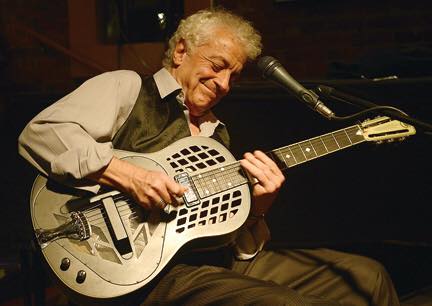 PLEASE NOTE THIS IS A FRIDAY CONCERT WITH SPECIAL EVENT PRICING OF $15/$20
We are thrilled to welcome Doug MacLeod back to our stage. He’s just walked away with another award, he 2018 Acoustic Blues Album of the year for “Break the Chain” Add this to Doug’s multiple other Blues Music awards and you’ve got one seriously good musician! With the ACMA’s own seriously good blues musician, Bill Metts, added to the booking we’ll have a cool time with hot music!

“Like all great blues men, MacLeod lives his music, and the songs are not just on the tips of his fingers and tongue, they are one with his being.”
– Blues Music Magazine

MacLeod is known for his superb songwriting, guitar wizardry, warm soulful vocals, wit and unforgettable live performances. At the heart of a Doug MacLeod performance is his knack for storytelling, bringing characters-from the faceless to the legendary-to strikingly real life.

Doug MacLeod’s newest release, ‘Break The Chain’, is quite possibly his strongest release to date, which speaks volumes.

Each song extremely personal and at the same time, universal; covering subjects topical, humorous, and soulful; from the satirical to the sublime.

The title song, ‘Break The Chain’, which was co-written and performed with his son Jesse. The song focuses on breaking the cycle of family violence and abuse, Doug and Jesse confront this pervasive issue directly. Together, they share the healing, reconciliation and peace available to all who work to prevent the cycle and Break The Chain.

Doug is an international touring artist who writes and sings original songs that are based on his own life and experiences. He learned from the old masters and carries forward a valuable tradition.

As a youth Doug overcame abuse and a crippling stutter by turning to music. After picking up a guitar, and singing – he found his voice.

From 1999 to 2004 Doug hosted Nothin’ But The Blues, a very popular weekend blues show on Los Angeles’ KLON-KKJZ. He has also been the voice for The Blues Showcase on Continental Airlines. For ten years he penned “Doug’s Back Porch,” a regular feature column in Blues Revue Magazine in which he shared his humorous and insightful stories with thousands of readers. He is one of the four featured artists in the movie “Resonate: A Guitar Story”, the feature documentary on the making of National Guitars.

Like the old masters who taught him, MacLeod’s music expresses life and times through an intangible, elusive quality that may simply be a keen sense of what matters most. Doug’s music, stories, and philosophy provide a healing that has helped others overcome the hardships of their lives.

Doug subscribes to the philosophies he learned from country bluesman Ernest Banks of Toano, VA. “Never play a note you don’t believe” and “Never write or sing about what you don’t know about.”

As Pee Wee Crayton’s widow Esther once told Doug, “You have a message and you’ll send that message mainly to the people who don’t go to church.” Amen.

A little about Bill Metts: “I started playing guitar when I was 19 during the country blues revival of the late 60s. I fell in love with the music of Taj Mahall, Mississippi John Hurt, Doc Watson and others of that ilk. Just about everything that I have done since then has been in that down home finger-picking style. I had the honor of being asked to perform at the annual Mississippi John Hurt Blues Festival in Avalon Ms. in 2011. All types of music move me I but prefer to play and sing traditional Americana roots music.”
P
https://www.mettsmusic.com