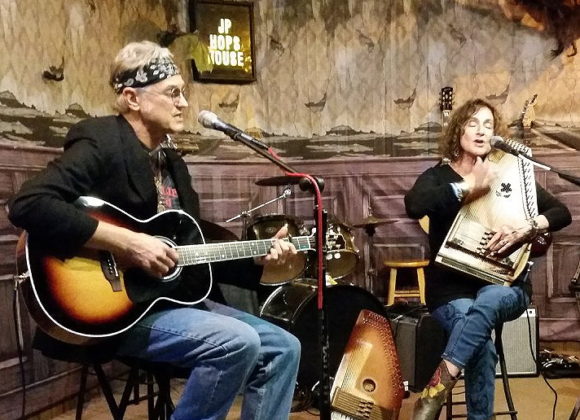 The ACMA is excited to have back on stage, these two touring ACMA members

Acclaimed, Singer/Songwriter, and hit & run Terlingua, TX resident, Hank Woji is a self described “Jersey Shore Ex-Pat turned West Texas Desert Rat” with roots in folk, country and blues. Critics have described Hank’s music as “acoustic-wielding, sharply observed, Americana all the way” and being “in the best tradition of the Texas troubadours like Guy Clarke, Townes Van Zandt and Butch Hancock.”

A Pennsylvania native who escaped winter and now resides in Sarasota, FL, award winning Singer/Songwriter Eileen Kozloff is a multi-instrumentalist who is best known for her unique style on autoharp and for her soaring vocals and commanding performances. Critics call Kozloff’s approach “emotive, clear and controlled, reminiscent of the best of the revivialists, such as Joan Baez or Anne Hills.”

Together Woji & Kozloff feature sparkling autoharp & guitar interplay and improvisation with vocal harmonies straight from Appalachia to the Old West. With 10 recorded CDs between them, their performances showcase their extensive catalog of original songs as well as the occasional cover by artists ranging from The Carter Family, Greg Brown and Woody Guthrie to Butch Hancock, The Grateful Dead and David Gray.

Since a chance meeting as performers at the 2013 Sarasota Folk Festival, the duo of Woji & Kozloff has been performing extensively over the last 5 years throughout Florida, Texas, the Gulf Coast and the Northeast U.S.