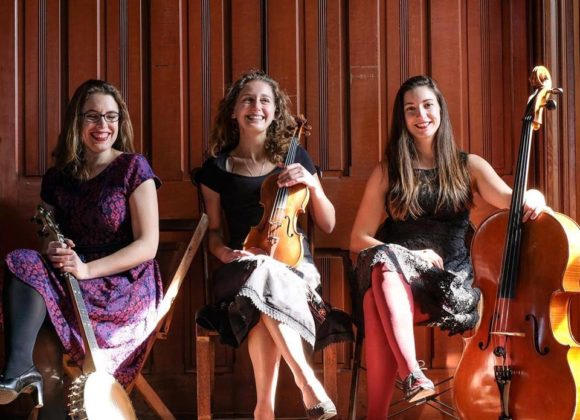 PLEASE NOTE; THIS CONCERT IS ON A FRIDAY…NOT SATURDAY. FRIDAY NOVEMBER 17TH. 🙂

Chamberfolk: Three classically trained musicians playing original music, as intricately arranged as a string quartet, lyrically rooted in the singer/songwriter tradition, and wrapped in three-part vocal harmonies reminiscent of both Appalachia and Medieval Europe. Building from the tonal depth of the cello (or is it a bass?), layer in the shimmering sounds of a violin and the strikingly natural addition of banjo to create a sound at once familiar and impossibe to categorize. Unapologetic genre-benders, Harpeth Rising fuses Folk, Newgrass, Rock and Classical into something organically unique.
The three musicians each hold classical performance degrees from some of the most venerated schools in the world: Indiana University, Oberlin, Eastman School of Music. But their classical background is only one dimension of this trio’s powerful musical voice. Hailing from vastly different parts of North America, each member of Harpeth Rising brings different influences to the core sound. Born in Brooklyn, NY, Maria Di Meglio began the cello in 4th grade, and developed her playing style studying both classical music and traditional songs of her families’ ancestry across Western Europe and the Caucasus. Michelle Younger of Charlottesville, VA comes by her modern spin on old-time infused banjo authentically; her family has been in the United States for generations, and she is a direct descendent of Cole Younger, a member of the James-Younger Gang and the namesame of his very own banjo tune. Jordana Greenberg, violin, grew up listening to the sounds of Stan Rogers, Leonard Cohen and Natalie McMaster in her native Canada before moving to Southern Indiana as a child. She studied classical violin by day through the pre-college program at Indiana University, and spent her nights learning the folk tunes and classic rocks songs that her family plays at the annual post-Passover jam session.
All three women began singing after they completed their instrumental studies, and found a passionate new musical avenue. They developed their voices and arrangements to bring life to the lyrical expressiveness of their original songs. Hallmarks of their music include expansive three-part harmonies, consummate musicianship and a deft, yet soulful, lyrical perspective.
Their most recent album, SHIFTED, debuted at #1 on the Folk-DJ charts and was released to international acclaim. Tim Carroll of Folkwords wrote “Choose words to define this latest album – progressive, creative, innovative, imaginative – they all describe what’s on offer…Alternatively, don’t attempt to categorise their ingenuity with words, take the shortest route, immerse yourself in Harpeth Rising and let the music carry you with its flow.” Chris Spector at Midwest Record said “Taking Newgrass to the next dimension, taking back lyric writing as an art form, if you’ve cleaned your ears out recently, this set is going to blow your mind. One of a kind, in a class by itself and simply superlative throughout.”

ACMA’S own Millie Van Horn will open. Millie has her own special story to tell and she does it through song.