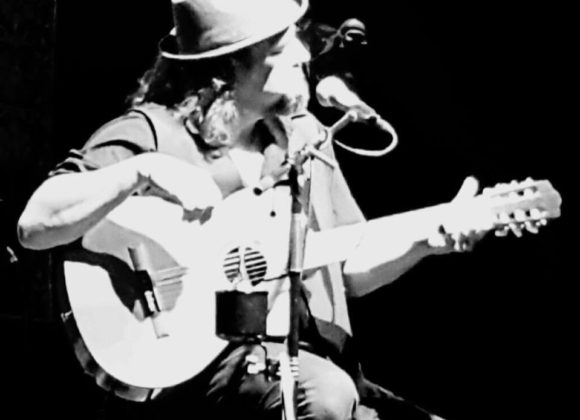 The ACMA is happy to welcome back the authentically entertaining master of the stage Lipbone Redding, No loopers, no special effects. All sounds are all Lipbone! Lipbone has taken his singular vocal instrumental style to a new level by playing guitar and producing all of the instrument sounds while simultaneously singing and storytelling without the use of electronic effects nor a loop pedal. Really, you should check him out.

In his early twenties, Lawrence “Lipbone” Redding migrated from North Carolina to New York City with his guitar. After a brief stint as an actor, carpenter, bartender and producer for the Museum of Sound Recording, he promptly became a subway musician.

From the swampy farmlands and beach towns of coastal North Carolina. Lipbone was steeped in the musical tradition of Soul, Boogie and Blues.

From 1998 to 2001 Lipbone honed his guitar and people skills amongst the underground caverns of New York City, In 2002 his craft allowed him to travel and make a living wherever life took him: India, Europe, South America, New Orleans, San Francisco. Along the road, he forged lifelong collaborative relationships with producers, artists and masters around the globe.

In 2005 Lipbone Redding emerged into the vibrant East Village nightlife, where he became a staple of the downtown music scene. From 2005-2012 he held a residency at the tiny but famous Jules Jazz Bistro on historic Saint Mark’s Place. Friday night and Sunday brunch with The Lipbone Orchestra became a regular happening frequented by hipsters and tourists alike. It was there amongst the champagne, rowdy cabaret atmosphere and weekly packed house that Lipbone developed his signature jazzy Lip Trombone and unique style of musical storytelling.

In 2006, In the East Village, Lipbone met world famous producer Ahmet Ertegun, founder of Atlantic Records (Ruth Brown, Joe Turner, The Clovers, The Drifters, The Coasters, Ray Charles, Ben E. King, Solomon Burke, Otis Redding, Sam and Dave, Percy Sledge, Aretha Franklin, Wilson Pickett, Led Zeppelin). Ahmet, on a date night with his lady, motioned Lipbone to sit at his table. He offered his hand and confided “You play trombone with no trombone, better than some trombone players that I know.” Lipbone took it as a blessing and hasn’t looked back since.

In 2007 Lipbone signed with Indie label, Be-Pop Records, founded by bass player and producer Jeff Eyrich (Natalie Cole, Tanya Tucker, T-Bone Burnett, John Cale, The Blasters, The Plimsouls, Dave’s True Story, Cheech & Chong). 5 albums and a “Best Of” compilation have since been produced by Jeff and Be-Pop Records. It was also during this time that Lipbone teamed up with choreographer/dancer, Bill T. Jones (Spring Awakening, Fela!) to work on Chapel/Chapter. The live performance played to audiences worldwide and Lipbone, along with the other collaborators, won an OBIE award for Best Collaborative Performance.

Since 2012, in order to maintain a travel lifestyle 200 engagements per year, Lipbone has returned to his roots and has sprouted new shoots. An uncanny vocal range, a nylon string guitar, a wooden spoon duct-taped to his foot and a lifetime of stories are all he needs to get the party started.

Lipbone Redding mostly tours as a solo act but collaborates regularly with other musicians and his trio, The Lipbone Orchestra. He has shared the stage with many great artists including Marcia Ball, John Mayall, The Dirty Dozen Brass Band, Tab Benoit, Cyril Neville, Jimmy Hall, Jonathan Edwards, Rita Wilson, Shemekia Copeland, Tommy Castro and others.

Opening musician, Bruce Gallant has been writing songs for over 30 yrs. His songs are a reflection of different times in his life and he considers them his journal. Cecile accompanies him on mandolin. They have recorded one CD “Her and Me”, and are presently working on another.