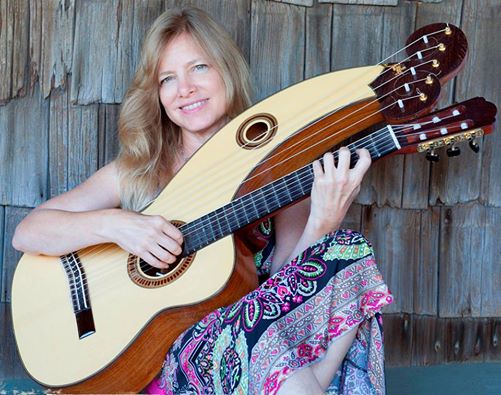 SUNDAY Feb. 18th, the ACMA welcomes back Muriel Anderson in concert, complete with her stunninly beautiful AudioVisual show.
One of the world’s foremost fingerstyle guitarists and harp-guitarists, Muriel Anderson is the first woman to have won the National Fingerstyle Guitar Championship. She appears on the cover of Classical Guitar Magazine, Spring 2017, and concurrently in main feature stories in Guitar Player Magazine and Acoustic Guitar Magazine. Her recent CD “Nightlight Daylight” has won top honors in 11 national awards. She has performed/recorded with Chet Atkins, Les Paul, Victor Wooten and the Nashville Chamber Orchestra. Her obvious joy of music, humor and her facility across the genres of folk, classical, jazz, bluegrass and international music is revered by guitarists worldwide. An engaging performer, Muriel’s unique approach to the instrument virtually transforms the guitar into a lyrical choir, then a marching band, then a Japanese koto, then a Bluegrass band, one minute launching into a Beatles’ tune and the next, a Rodrigo concerto. Her video “Why Worry” has garnered a total of over 8 million views. Muriel is host of the renowned Muriel Anderson’s ALL STAR GUITAR NIGHT® and founder of the MUSIC FOR LIFE ALLIANCE charity. In addition, her new program “Wonderlust” is highlighted by a backdrop of stunning visuals by celebrated photo-artist Bryan Allen.

Her recording of “El Noi de la Mare” appears in Woody Allen’s film “Vicky Cristina Barcelona.” and her “Heartstrings” recording accompanied the astronauts on the space shuttle Discovery. Muriel Anderson has released more than a dozen instrumental CD’s, eight instructional DVD’s and guitar books published by Hal Leonard, Mel Bay, and Zen-On Japan. Her compositions include commissioned classical works for the Nashville Chamber Orchestra and Vox Caelestis Womens Choir, as well as songs which have appeared as title tracks for three albums by various artists.

Muriel has published articles in Guitar Player, Acoustic Guitar, Fingerstyle Guitar, Classical Guitar and Frets magazines, and is currently a regular columnist for Acoustic Guitar Japan magazine. She is a regular guest instructor for Truefire and at guitar workshops across the country. Some workshops are sponsored by her GHS Signature strings. She plays many handmade instruments including Camps Guitars, Mike Doolin harp guitars, Morris steel string guitars (Japan). She uses Seymour Duncan D-Tar and Barbera pickups.

Muriel Anderson is a good friend and a great guitarist. She deserves national recognition
…Chet Atkins

Just one hell of a great player …a great personality and what I like is the touch that Muriel has on the guitar, the way she plays it like we all wish to play.
…Les Paul
www.murielanderson.com

About Ray Cerbone:
My music is influenced by the songwriters of the mid 60’s through the writers of today. I moved to SW Florida 8 years ag, and soon became one of the founding members of The Americana Community Music Association, a Ft. Myers based group formed to promote original music, and began writing my own songs. I had the privilege to open for Florida singer songwriters Roy Schneider, Larry Mangum and Brian Smalley, and also open for touring musicians Jamie Michaels, Pierce Pettis and Robin O’Herin to name a few. I performed at The ACMA both solo and in special events, like The Island Hopper Festival, and local house concerts, as well as folk festivals like Barberville, Lake County, Will MacLean Folk Festival and Sarasota where I won the open stage competition. Playing mostly fingerstyle guitar and original songs, my music crosses several genres from storyteller ballads to folk to country based fun songs to blues.
Five years ago, after performing a song for a well-known rock drummer who was putting a contemporary blues band together, I became the singer for The Apocalypse Blues Revue. Since then we have been signed to Mascot/Provogue Records, recorded our first “full on” CD, and completed our first tour. We have headlined at clubs and events as well as opened for the likes of Blue Oyster Cult, Steven Tyler, and Robbie Krieger of The Doors. Our second tour is in the works and most of the songs for our second CD have been written. We were recently informed that we were nominated by our record company for a Grammy in the “best new contemporary blues record” category. Our music has been featured on BB King’s Bluesville on Sirrius Radio as well as radio stations worldwide. Check us out on www.TheApocalypseBluesRevue.com.

My Blues project has not stopped me from writing new songs in the “Americana” genre…my first love, and I continue to write and perform solo and with The ABR.”
Website: facebook.com/RayCerboneAmericanaMusicA