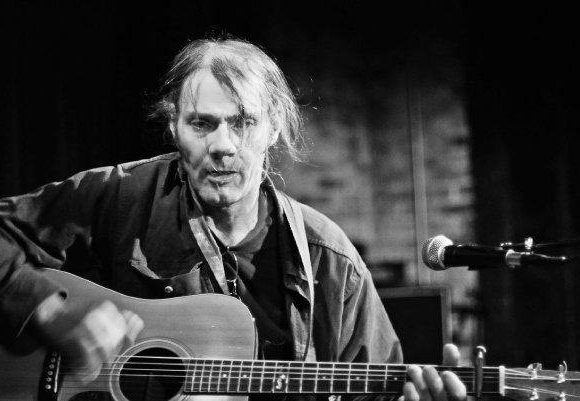 On the North Carolina side of the Southern Appalachians, the land still retains its secrets.
It’s a place of paradoxes, where poverty is handed down from one hardscrabble generation to the next in towns passed over by the New South progress that gives a city like Asheville its bourgeois charm. It’s a resilient pocket of wilderness where a small band of Cherokee once disappeared into the misty hollers to wait out the white man’s ire, back in the deep woods where old growth timber blocks out the sunlight and compass needles sometimes spin crazily and the trappings of civilization give way to things beyond human understanding.
On the cusp of releasing his 13th studio album — “Come Hell or High Water,” out XXX on Singular Recordings — singer-songwriter Malcolm Holcombe is a both a part of and apart from those Blue Ridge hills, a Southern folk golem brought to life by the deeper mysteries that give these hills so much of their folklore.
His songs belong in the same Western North Carolina echelon of mysteries like the Brown Mountain Lights or the ghostly apparitions along Helen’s Bridge or the phantom choir of Roan Mountain — things that surpass conventional explanation but summon forth a combination of awe and primal longing, an ache to understand the great questions of the human condition.
“Malcolm Holcombe is an artist of deep mystery and high art; he is who I listen to, and have for over 20 years,” says Darrell Scott, one of Nashville’s premier sessions instrumentalists and a nationally respected singer-songwriter. “All the goods that I value in songs and artistry are in Malcolm.”
“I think for most songwriters, songs are like clothing. Malcolm’s songs are his skin,” writes fellow Nashville tunesmith David Olney. “They are a direct expression of who is as a man.”
“People like to say Malcolm Holcombe is a national treasure, and they got that right,” adds R.B. Morris, an East Tennessee singer-songwriter, playwright and the former poet laureate of the City of Knoxville. “He stands on all the old American music traditions and takes them his own way into a very individual music expression.”
www.malcolmbholcolmbe.com

Opening for Malcolm is another true Americana original, Roy Schneider. Troubadour and formerly syndicated cartoonist Roy Schneider has developed a devoted fan base for his flavor of Americana music since 2008, through international radio airplay and consistent touring with life-and-stage partner Kim Mayfield. Known in festival circles as the Reckless Saints, Schneider and Mayfield have brought their musical blend of the gritty, fun, soulful and sweet to delighted audiences across the USA and abroad, exploring and expanding their musical horizons with every performance.

“[Schneider’s] gift for blending Southern-influenced folk, blues, country, and rock into a seamless genre with his own signature sound demonstrates his connection to the best in the tradition of fine wake-me-up and kick-me-in-the-ass roots music.” ~ No Depression