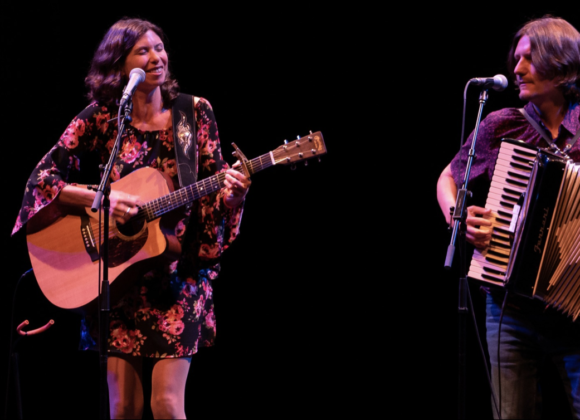 February Sunday night show.…Mare Wakefield and Nomad in concert! “Lovely vocals and even lovelier songs. Mare Wakefield and Nomad are a little bit old country, a lot contemporary folk a la Dar Williams or Patty Griffin.” ~ New York Times
Find out more about them here:
Born with wanderlust in her DNA, Mare lived in eight different places before she was ten. “It was a roller-coaster way to grow up, but my brother and I learned to fit in fast,” she says. “We picked up Wisconsin accents in two weeks. Eighteen months later we were drawling like native Texans.”
For Turkish-born Nomad, the journey was equally varied. His musical education began at the exclusive Istanbul Conservatory and continued with a scholarship to Berklee College of Music. Nomad’s gift for musical arrangements includes a full arsenal of classical, folk and jazz chops.
Versatility and travel-scapes are evident in their music. Listeners roam through Arizona deserts, Oklahoma oil fields and Amsterdam canals. Journeys go inward too, exploring hope, heartbreak and barroom brawls. Story and song are woven together by Mare’s intimate delivery and Nomad’s exquisite piano and accordion.
Currently based in Nashville, the pair were 2016 and 2015 Kerrville NewFolk finalists and 2015 Falcon Ridge Emerging Artists.
marewakefield.com

Opening the show is ACMA VP and singer/songwriter Bob Williams. Bob started writing songs at an early age and never stopped. He will be releasing his new album at this show, Will I Ever Feel That Way Again. This is  Bob’s 4th solo album. He performs regularly in Southwest Florida and in Western North Carolina. His songs are  Americana, a mix of Roots, Folk, Country, Bluegrass, Blues and all the good stuff in-between.

Always eager to share amusing stories behind his lyrics, Bob’s songs are personal, irreverent, funny, sad, and most important, true to his heart. Checkout his music at, www.reverbnation.com/bobwilliams2

Door donations:
$12 for Members
$18 for General Public
Tickets available at the door
End your weekend on a perfect note and join us for great live original music!
+ Google Calendar+ iCal Export