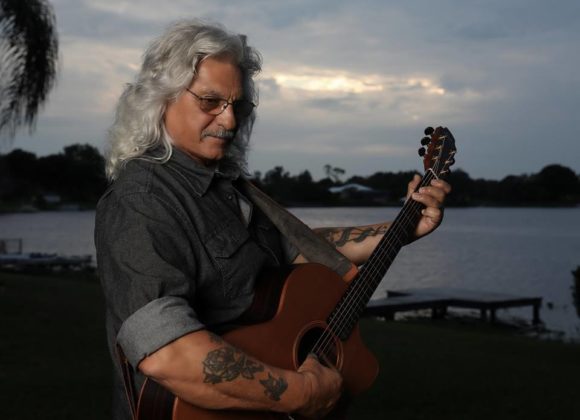 Ray Cerbone CD release party with special appearance by “The Trio” featuring Gil Jusino and Maria Valsi.
One of the founding members of the Fort Myer’s ACMA (Americana Community Music Association), Ray began playing guitar during late 60’s folk scene. With the support and inspiration of fellow local and touring musicians, he began writing and playing in earnest in 2010. Traveling a long road in a short time, his music encompasses many genres, including Americana, Folk, Blues, Ballads, and a little bit of Country. His storyteller style takes the listener to another place in time, his music and lyrics bringing evocative insights into the many sides of life. Ray is also a singer-songwriter’s song-singer. That is, he does interpretive covers of other great originals by very talented artists using his own creative touch. His inventive fingerstyle guitar is uniquely diverse and easy-on-the-ears.

In addition to his status as featured artist at local performance venues in SW Florida, Ray also hosted for WGCU, a live radio show for Michael Haymen’s “Morning Zoo” featuring on “The Aficionado Show.” His song ”Fondest Memory of All”, a tribute to Guy Clark, has been celebrated on the Austin-based KEOS radio. He has opened for such extraordinary artists as Roy Schneider, Robin O’Herin, Jaime Michaels, Pierce Pettis, Muriel Anderson and Jefferson Ross. Performances include an SRO show for the ACMA, and various house concerts at private residences, as well as several Florida Folk Festivals.

His alter ego is “Rafer John,” lead singer and co-songwriter for Apocalypse Blues Revue. Group members include Brian Carpenter on bass, Tony Rombola and Shannon Larkin of Godsmack, respectively, on guitar and drums. Featuring all original compositions, Apocalypse Blues Revue signed with Mascot/Provogue Records and, after the release of their first CD, toured the Northeast, opening for Steven Tyler, Robbie Krieger of The Doors, Blue Oyster Cult, also touring with Kenny Wayne Shepherd, and playing The Chesapeake Bay Blues Festival, as well as various Blues venues around Florida and the East coast. ABR’s second album release “The Shape of Blues to Come,” produced by Dave Fortman of Ugly Kid Joe, was released in July of last year.

Ray has now released his own first pro-CD. It is a blend of traditional Americana and songs with styles he has developed through the years working with musicians from all Genres.
https://www.facebook.com/RayCerboneAmericanaMusic/
www.facebook.com/B Side Lake Music