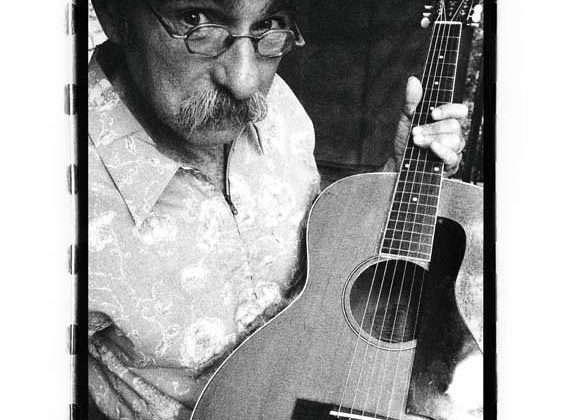 Another living legend comes to the ACMA! Roy has the goods: the original, the bare-knuckle, the low-down . . . blues. Who can say they were friends with the Rev. Gary Davis, Pink Anderson and Robert Lockwood? And toured with Arthur Big Boy Crudup, Hot Tuna, JJ Cale & Bonnie Raitt ? Roy can. He has the stories, the licks, and the mystery of timeless music in his fingers. He’s been featured on a PBS special and interviewed by Terry Gross on “Fresh Air.” He’s also a regular at Fur Peace Ranch, where he teaches along with Jorma Kaukonen. When he brings his ‘Tour Bus’ to town, a one-man blues-fest ensues. He plays and he entertains, feeding us music and stories, and the evening is a celebration for us all. We’re privileged to have Roy here to preserve–and extend—the tradition of great American blues music.
SINGER-SONGWRITER-STORYTELLING-BLUESMAN….. Roy Book Binder has been rambling around the world for the past 45 years! He gave up his Greenwich Village “pad” in the early 1970’s and lived in his “Tour Bus” for the next 15 years criss crossing the US and appearing at festivals throughout Canada & Europe.

Book Binder, travelled with the legendary Rev. Gary Davis in the late 60’s….. The Book, recorded his first solo acoustic Blues album in the 70’s, which was the first to receive 5 stars in DOWNBEAT magazine! In the late 80’s ‘The Book’ was part of Bonnie Raitt’s East Coast Tour, which included an appearance on The Grand Old Opry which led to almost 30 appearances on NASHVILLE NOW’s, Ralph Emory Show! In the 90’s he often appeared with JORMA KAUKONEN (who recorded 2 of Roy’s songs)

Last Aug. 19th, THE GOOD BOOK, Roy’s latest release of all original songs, reached #3 on AirPlayDirect’s Americana charts! #1 was Guy Clark & #2 was the late Townes Van Zandt. Folkdj.org had Roy in the top 3 artists for July.

Karen has been playing guitar on and off for most of her life, while focusing her creative flow towards Visual Arts the other of half the time. She studied Printmaking at Rhode Island School of Design, and created Woodcarvings and Paintings for a few years after graduating.

Sidelined from her day job by an injury about 14 years ago, she picked up her guitar to fill the time. It was then she discovered a musician named Rory Block, who is known for her Authentic arrangements of old-timey Blues from the 1930s.

In Karen’s words…”I had never heard a woman play and sing Acoustic Blues like that before, and it had a profound effect on me…. before I heard Rory Block, it never even occurred to me, that women could play that way… Now, I find that a lot people respond to my playing this music the same way.”

After months of practicing, Karen decided that she must share this great stuff she had been learning. But that meant overcoming her paralyzing fear to perform.

Encouraged by a supportive group of local musicians she found in Southwest Florida, she kept at it. Along with attending the Swannanoa Gathering over the past few years she is gaining confidence.Karen plays at Open Mics and Jam Circles around Punta Gorda and Englewood.She is also a long-time member of the Guitar Army in Punta Gorda, and plays in shows at the ACMA in Ft. Myers.

Karen wants you to know, although it is especially scary to open for Another one of her long-time Guitar Hero’s: Roy Bookbinder…it is also an incredible honor and a dream come true.