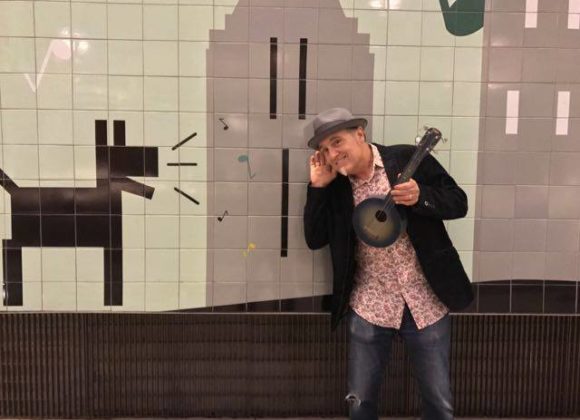 Out of the heartland of America, stomping grounds of Truman and Twain, “powerhouse” troubadour Dana Cooper dedicated himself to a life of music over 40 years ago. This song poet engages and inspires audiences around the world with his quick wit, insightful stories and commanding presence. He is the recipient of the 2014 Heritage Musician award from Pilgrim Center for the Arts in Kansas City, MO. He was also named the 2015 Spirit of Folk award winner by Folk Alliance International. He has performed on Austin City Limits, Mountain Stage and the Kerrville Folk Festival where he was nominated for their Hall of Fame. Cooper’s songs have been recorded by top-notch artists such as bluegrass star Claire Lynch; Irish vocalist Maura O’Connell; and luminary songwriters Pierce Pettis and Susan Werner. Cooper’s mixture of flat-picking, finger-picking and percussive strumming style is legend among other guitarists. An expressive singer his voice is ageless evoking a rich lifetime of experience.
www.danacoopermusic.com

ACMA Member Ross Jordan Opens
Ross has been writing songs since he picked up a guitar at
age 10. He went on to study music and classical guitar at
Rutgers University. His songs reflect the regional influences
from all of the parts of the country that he has lived from
New Jersey to the West Coast o the Mid-West and now
Southwest Florida, His songs feature catchy tunes and lyrics
and audience members can often be seen dancing and
swaying and singing along while he performs
www.reverbnation.com/rossjordan
+ Google Calendar+ iCal Export