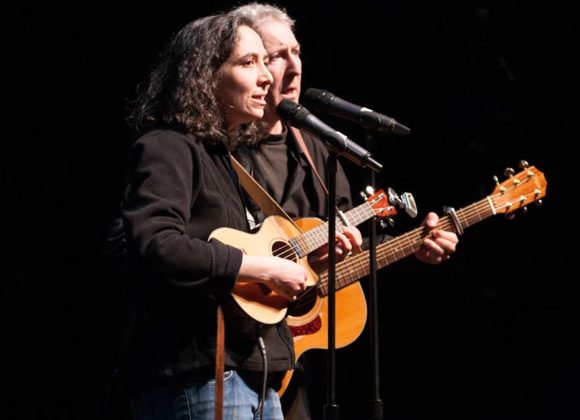 From deep within the urban forest of Pittsburgh’s East End, the Squirrel Hillbillies often emerge to share their eclectic mix of acoustic roots music, spanning folk, country and blues.

Rabidly social and clawingly curious, they relish opportunities to interact with diverse audiences. They perform regularly at festivals and folk clubs as well as non-traditional venues across the US and the UK.

Through a collaborative, nonlinear songwriting process, duo partners Jenny Wolsk and Gary Crouth draw from personal experiences, third-hand stories, and vivid imaginations to craft songs that are unpredictable and quirky yet widely accessible. Their CDs have gotten radio play on stations around the world.

The Squirrell Hllbillies had so much fun at their last ACMA show they were willing to book WAAYYYY out to schedule another gig and we were happy to oblige. don’t miss them!
www.squirrellhillbillies.com

We don’t get too see/hear enough of Ralph Leesburg on our ACMA stage. Don’t miss a rare performance when he opens the show for the Squirrels! About Ralph: Ralph has been making music for more than 50 years but it has only been the last 20 that he has set intentions on positive music. A little folksy, a little rootsy, a little bluesy, a little bit of rock’n’roll. And something he likes to call Metaphysical Country. He really likes sharing the vibe and hopes to leave you smiling.